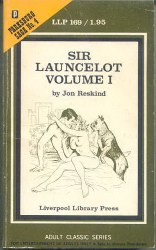 It wasn't anything like the modern little bungalow they'd had on Jamey Halo's estate up at Quarrysite, but she wasn't going to allow herself to become depressed over that, Susan Sheldon mused sullenly. It was clean and fairly well furnished; besides, moving had been her own idea; Jamey, had wanted them to stay, rent free, but with Cal gone such a thing was out of the question. She could only imagine what the Parksburg gossips would have made out of that… and probably with good cause, for certainly she could feel herself weakening more each time she saw him. She'd had to consider Nadine and her future… consider the bitter scars that wicked tongues could leave on the mind of a delicate and beautiful young girl… and she had made her decision accordingly.

Susan sat at the small kitchenette table drinking coffee and smoking her first morning cigarette. She wore a light blue wrapper over matching pajamas, its tailored-design doing little to hide her willowy Eurasian beauty, her erect breasts, slender waist, full rounded hips and buttocks. A voyeur would have to guess at the sleek lushness of thigh, the enchanting contour of calf and the hidden strength of those long, smooth legs, but he would form his prurient conclusions from the dazzling loveliness of her finely featured face and long, raven-black oriental hair… feeling confident in his assumptions.

It was six-thirty and she hadn't been able to sleep; in fact, the whole night had been a fiasco that she laid to her troubled, fear-filled and frustrated thoughts, the unfamiliar, too-soft bed, plus, having her daughter as a sleeping partner in place of Cal.

She shook her lovely head in disbelief. Would she ever get used to it? Cal was dead! My God, it hardly seemed possible… Cal dead… a suicide… in his grave two-months now, yet, each time the realization raced through her mind, its impact was as shocking as when Chief Archer had first broken the horror to her. It hadn't made sense then, her husband of sixteen years shooting himself, and she doubted that it ever would anymore than the typewritten note he had left, explained his reasoning.

Can't make it. Nothing to live for. It's too complex… and there's no love…

Once more, Susan slowly wagged her exotically beautiful head in non-conviction; she was so damned confused. Life at its best had never been generous to her, but at least she'd had Cal… for what that had been worth. She looked around at the little three-room apartment, each chamber opening with large archways into the other, only a collapsible screen partitioning off the bed. Thank God the bathroom was private, anyway, she thought sarcastically.

She'd hoped to find something more acceptable within her limited budget, but after canvassing Parksburg, she'd been almost happy to take this third-floor makeshift that had once been part of a rather plush hotel suite, and in the center of the down-town area. Progress had eliminated the hotel and now the street-level consisted of second-rate, low-rent shops; but, at least it was closer to her work, she supposed, and really it was adequate for just the two of them.

Nadine, poor darling, she'd been so brave through all of it, more adult than child, more sister than daughter… beautiful, talented, a rare teenager, indeed, measured by today's standards. And she was going to have a future; she was! Even her father had wanted that for her in his sober moments, but he'd done little, if anything, to prove it to her. Not that he'd been intentionally cruel, nor physically brutal; he'd simply neglected her… neglected both of them, in fact, since the day their baby-girl had drawn her first breath in that Boston hospital; but the last five-years had been the worst, especially the final two that he'd worked as caretaker for Jamey Halo, and she herself, had fallen under the spell of the young TV actor.

Thinking, she wondered if her husband hadn't shot himself, if he might not have drunk himself to death at the rate he was going… and with never a thought or provision for his wife and daughter. Now, as she pondered over that, she couldn't help but tremble with the overwhelming fright of her sudden responsibilities. Except for their clothing, he had left them near-destitute, and once again she thanked the good Lord for her job. Of course, it wasn't much, prestige-wise… waitress work never was… but it was honest employment and the Diamond Dell was the finest dinner house in Parksburg, even if it was only a front for the gambling casino Max Bovino operated upstairs. Whether the once notorious blind-owner functioned within the law was not her concern, and it didn't seem to bother the elite country-club set who populated the haven nightly… but she was concerned with the additional money the girls 'upstairs' made hustling cocktails, in comparison to those serving dinner on the first-floor, and she had made up her mind to speak to Mr. Bovino about it. In a little while, she would call him.

Why not? it was easier work, probably more pleasant, and accordingly, more rewarding. Of course, Cal would never have allowed it; he'd always been an extremely jealous man… although God knows, she had never given him any reason to be… But Cal was gone… and she had Nadine to look to now… only her future mattered… all other things were secondary… Cal was dead! Susan wiped an uncontrollable little tear from her eye.