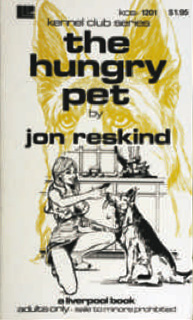 Beyond the high, pumice-stone wall and below the steep cliff-side, the surf roared in great sweeps of white foam against the rocky shore-line, the blue waters of the Pacific sparkling like a sea of priceless gems beneath the brilliant California sky. On an inflated rubber raft, bound by the azure-colored tiles of her heart-shaped swimming pool, the curvaceous blonde girl with the long shapely legs, though aware the view was all there gave it little thought. As always, it was the soothing sound of the pounding surf and not the sight which tranquilized her. In fact, the vast ocean in its incessant anger actually upset her, but then, it wouldn't take much to do that this bitchy midday, she irately thought.

Idly floating atop the breeze-stirring, crystal clear water, Eve Novak lay stretched out on her back, wide-brim hat shading her half-closed green eyes, a cooler glass filled with ice, gin and tonic resting wetly against the satiny skin of her sun-tinted, flattened belly. From beneath the brim, she could look down between the rounded white mounds of her naked breasts, following the sleek, symmetrical lines of the sexy, tanned legs to her tiny feet with their daintily pedicured, clear-polished nails where the sun reflected in scintillating glimmers. These she concentrated on for a few wasteful moments in an effort to escape the fuming bitterness the young boy had left with her when he had just up and walked out some hour or so before.

Goddamn him, anyway! She hoped to hell the cops busted him, the ungrateful, hair-faced junkie! And they would sooner or later, no doubt about that, but it wouldn't mean a damn thing. Just another check-mark on his already worthless existence. Hadn't he admitted to her at least a half-dozen prior arrests for everything from pushing drugs to rape and armed robbery? Ooohhh! The filthy bastard, accepting her luxuriant bed and food, the likes of which he'd never even remotely dreamed of, reveling in it, and, her naked body for three days and nights, then having the gall to casually tell her she bored him! God, every time she thought about it, she could just scream out in rage!

What was even more exasperating to her than all else was the fact that she did feel his loss… that she'd actually been hurt and had begged him not to leave… and that he'd merely stood there by the door grinning at her, his handsome, young white teeth gleaming through the thick, heavy beard she had pampered and groomed for him, his lack of feeling for her as obvious in his hardened eyes as the untold number of men she had walked out on had probably seen in her own!

"Lady, you're a drag… know what I mean?" he'd droned with absolutely no inflection in his twenty year old tone. His young, hazel eyes were cold and empty, dilating from the fix he had shot into himself not twenty-minutes before in her bathroom, a poke of stuff she had bought for him the previous night from a known pusher in Monterey. "Fuck and suck and fuck again, that's all that clogs your pretty warped head. Hasn't anyone ever told you that cunt of yours is for pissing, too?"

"Oh, you… you ungrateful bastard!" Eve had steamed, barely able to hold herself from going at him with her unique set of clawing-talons.

"Ungrateful…? Hey, what's to be grateful for, baby? Like you bathed and fed me and I gave you some cock. So, we all got our kicks, didn't we?" he measured in that same vacant monotone. "I mean, you liked that taming the wild masculine beast, driving him crazy to crawl up between your luscious legs, or just laying there while you sucked the cum right out of the lining of his balls! So I played your game for a few days, but it was all jazz, nothing more, cunny-girl. You bought me some stuff and in payment, I let you use my cock to your heart's content. So what's this grateful shit?"

Remembering it vividly now, Eve could still feel the scalding tears blurring her eyes. Yet, even with the rage that'd been nearly consuming her, the thought of losing him had suddenly swept away all of the ego and pride she had ever known, or shown, with any of the multitude of men in her life. God, mean and heartless young animal that he was, she needed him! He did something for her, however warped and perverted it might be…!

"Please, Bo-Bo darling?" she'd pleaded, realizing now that she had never even learned his real name. "I-I'm sorry if I said… or did anything to make you angry…!" She had reached out for his hand which he casually drew out of her reach. "Don't leave me? Eve needs you, baby-doll. She loves you! My God, lover, who is she going to bathe and sweeten all up? Who is going to explain to her what the whole world is all about, and… and why there's no future less we have complete revolution…?"

"Oh, slip down off that dung-pile, lady," he'd disgustedly threw at her. "You got problems all right, and you need help about as much as any chick I've ever crawled on. The way I see it, for what it's worth, you've lived sixty years in your thirty, fucked and sucked… yeah, done it all until there's no more kicks left in the bag for you. My old man used to say that was what the movies did to its people, and I can see it in you… probably the only piece of truth he ever spoke. You're strung-out, babe, unraveled because you've drained your pot of sex. Now, you're leaning to the weirdo bag, else why should a cunt with all your beauty and loot want to jump into a lion's cage for a bang?"