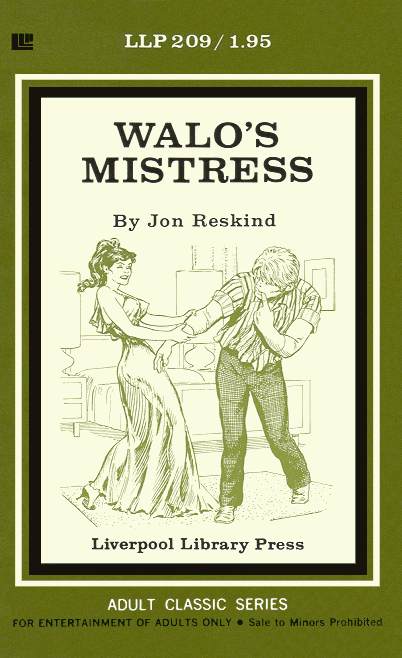 Lynn Carter had hoped to book a flight on a 747, but had decided not to wait until the following day just to satisfy a whim. The 707 was quite adequate in luxury and she certainly hadn't counted on getting an entire row of empty seats all to herself. Anyway, the whole thing was that she get to her darling, her handsome, sorely missed husband as soon as possible, and flight 641 to Los Angeles International Airport has provided that six hour transition from Bratham, Massachusetts.

She recalled that she'd smiled to herself as she gazed out the window at nothing but blue atmosphere and fluffy white clouds, smiled at the time-passing thought of what the two GIs were probably thinking just behind her. The empty seat to her right was going to make for some amusing and pleasant situations she'd decided, and it had. After all, she'd hardly resembled a wife of four years with her long blond hair and the way she was dressed… fashionable from the leggy, mini-suit standpoint and the fact that she was traveling solo. Who would ever guess that she was carrying six packets of ten one-thousand dollar bills in her purse… not a bulky arrangement, and snugly squeezed between herself and the inside arm of her seat? Sixty thousand dollars, the final settlement once the insurance company had decided that Earl Carter had truly and accidentally drowned at sea while on a fishing holiday. Of course, his body had never been found, how could it have been, when he was waiting for her right at that moment in California?

Two years… two long, lonesome and empty years… well, at least nearly that long before the insurance company had settled. Naturally, she'd had to have some innocent diversion; she was, after all, only twenty-two… and not the slightest bit in the dark regarding her physical attraction. Even so, she'd been extremely careful, never going anywhere without Nick, her half-brother, whom Earl had yet to meet, and the only living relative she had in the world. Truly, Nick had been super to her… but a straight girl hardly found much enjoyment in the places a gay escort preferred to take her, which had been, perhaps, just as well. The brother-sister thing had helped to allay any suspicions during the long insurance investigation.

Both her waking and dreaming hours had been constantly occupied with Earl anyway, her lover-husband who had finally made her see that it was the only way they could ever get a start; but for months she had fought him over the wicked idea… until he had eventually made her realize that accountants were to be had at ten cents the gross… and she remembered how he had influenced her with his warm kisses and passionate lovemaking each night… remembered as the young GI sat down in the empty seat beside her smiling openly and explaining how he was just back from twenty-eight months in Germany and was going home to Los Angeles. Later, the other, his buddy, had been a bit more aggressive, but it'd been the salesman from Newark who had the line, Lynn recalled.

He'd been a smooth one all right, and she had drunk with him… two cocktails while listening to his plight concerning his frigid wife.

She had even enjoyed dinner and a game of Rummy with him, but had merely laughed off his invitation to see L.A. She remembered that his handsome teeth hadn't been as white nor as even as Earl's, and now, lying there beside her darling husband at last, she realized how much she really loved this man who had persuaded her into helping him commit a sizable swindle. She wasn't sorry… they were going to be so happy.

"A penny for your thoughts, Baby," Earl whispered hotly into her face. "You were some where way off there for a moment."

"I-I was dreaming… I-I just can't believe we're together again, at last," she breathed lovingly, feeling him draw her naked body tighter to his own lean, strong one; yet, at the same time, she couldn't help the little unpleasant feeling that had been with her ever since he'd picked her up at the airport and brought her there. He had changed, but in ways she was yet unable to pinpoint; he seemed harder… more calloused perhaps, and the jargon he used, obviously the influence of these people he associated with… but physically… yes… yes, he was the same physically…! She could feel his rigid penis pressed against her hot thigh, and she tried to remember the length and thickness of it, the way it looked standing out from his strong, hairy loins, so stiff and proud with its cape of thick skin, the exciting, moist eye staring at her lasciviously from the tip of its purplish, massive head, and the masculine spectacle of his full, potent testicles hanging fulfillingly between his powerful thighs. Tremors of sensual delight rippled through her as she realized how badly she wanted him… needed him!

"I told you, Lynn Baby! Didn't I? I told you it'd all come off if we played it cool… and you did! You sure did, Rabbit! Damn, what a doll you are!"

He lay beside her, drawing her possessively inside his arms, crushing her full, rounded breasts against his hairy chest, while simultaneously, he shifted his hips to pressure his swollen hardness into the softness of her white belly. He kissed her, searching her receptive mouth with his hot tongue, then withdrew it. "I knew it'd work," he said. "I knew it! Did you ever doubt it?"