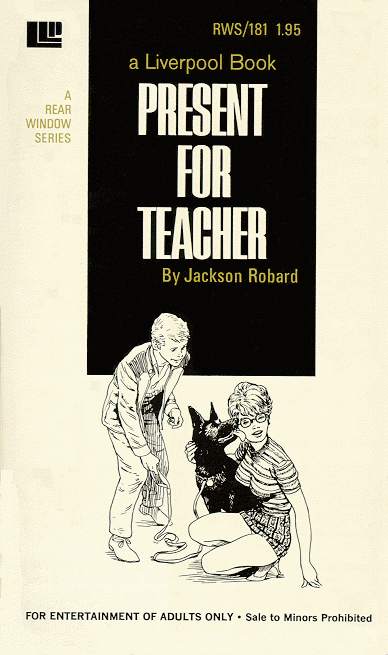 "God, you're beautiful, Miriam," Roger Trenton said in hushed awe as he stood near the lovely blonde woman. "You're the most beautiful woman I've ever known."

"You know you're every bit as youthful looking as when you were twenty. Why, if I didn't know better, I'd say you could be my son Mark's older sister."

The handsome, dark-haired man spoke with genuine admiration in his voice as he rapturously studied her magnificently-proportioned body. She was sitting in a relaxed position on a striped blanket, their picnic lunch spread around her like an offering, and her hand was slightly stroking the heavily furred neck of Roger's German Shepherd dog, Buck. Golden sunlight of the abnormally hot Indian summer filtered through surrounding pines and gilded her already tanned form like an admiring spotlight from the Gods. From where Roger stood at the other side of the mossy clearing, the pretty school teacher was the ultimate he had ever desired in a woman, and his leanly muscular thighs throbbed to possess all of her ripely curvaceous flesh.

Miriam Dodge was wearing far less than she really thought to be proper, considering she had hardly known Roger Trenton for more than a month. He was the biology instructor and assistant coach at Logansville High School, and she had met him when she'd joined the faculty in late August, preparatory to the coming school year. Now, in the third Saturday of September, he had convinced her to share a picnic with him in the wooded foothills west of the small Northern California community. She had eagerly agreed, having had enjoyable evening dates with him almost constantly since they'd met. Unfortunately, she had discovered this morning that her only clothes casual enough for mountainous trails were terribly revealing. The thinly sheer blouse barely hid her high-set, widely-spaced breasts whose rose-tipped nipples were clearly etched in the flimsy fabric of her thin brassiere. The taut material tapered down over a thin, girlish waist and flat, smooth stomach to where her hugging pink shorts clung lovingly to her smoothly sloping hips, pulling against the gracefully jutting curves of her thighs. Below the cuff of the faded hot-pants, her legs were long columns of breathtakingly curved flesh which tapered gracefully into thin, well-formed ankles. And as she'd shed her pair of brown leather flats, her slim bare feet with their small toes peeked from where she had curled her ripely tanned legs beneath firmly rounded buttocks.

Miriam's long, satiny blonde hair framed a heart-shaped face that would cause any male to turn his head when she passed. Her azure blue eyes were set slightly apart and her dainty, pert nose was dotted with freckles across its bridge. Her full ripe mouth had the lower lips protruding slightly in an almost perpetual little-girl pout, which added a sensual look to her round dimpled chin and softly tanned satiny complexion. She was a mature blonde Venus that would attract admiring attention from the most discriminating men – and envy from women.

She blushed under the frankly brazen gaze with which the older man roamed her lovely body and she squirmed slightly with embarrassment on the blanket. She was aware that her clothes were more suitable to the flat beaches of Fort Lauderdale, Florida, where she had worn them up to her abrupt and shameful flight last June. Her first thought this morning had been to postpone her date with Roger until she could afford some new clothes, but then she had considered how much she wanted to be with him, and she had rationalized that the day was warm enough to allow her to appear so skimpily attired. Besides, she'd told herself as she'd dressed, she wanted to attract him very much and prove to herself that the evil curse she'd been living under had been broken by her flight across America to California.

"But I love you, Miriam. You certainly must be aware of that by now." He clenched his eyes tightly shut for a moment, brushing his hand through his thick black hair. "I think of you night and day, and if I don't say it I swear I'll go mad. Mad, do you hear? I… Love… You!" he said explosively through his teeth.