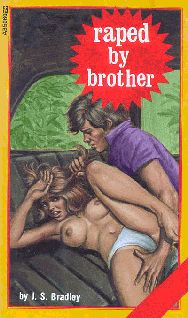 Monica Sanderhoff walked barefoot over the springy runners of St. Augustine grass toward the edge of the big yard. She paused in front of the bougainvillea arbor that nearly concealed the presence of the high school wall behind it.

She wore her white bikini. The little triangles of clinging material snugged against the weight of her full tits, holding the ripe balls of flesh high and wide and letting the rubbery bumps of her nipples show plainly.

The panties were molded around her firm, rounded asscheeks and smooth flanks. They were damp from her dip in the Gulf just a few moments ago, and the material dipped into her deep asscrack. It pulled snugly at the lips of her puffy, virginal pussy, and the sensations against her cunt as she walked made the dampness at her crotch increase shamefully.

A sexual throb went through her flat tummy at the thought of what she was about to do, just the way it always happened, and she felt another charge of warm, slippery cunt honey seep from her pussy mouth into the crotchband.

She shivered slightly and stopped in front of the arbor, hugging her breasts in a furtive way. She turned around and shaded her eyes from the afternoon sun, which was over the Gulf now. She held small pruning scissors in her hand, and it should be clear to anyone watching that she'd come to clip some of the bougainvillea blooms.

The stucco wall at the edge of the yard went in a straight line toward the Gulf. It became a nearly solid barrier of thick timbers bolted to treated pilings driven solidly into the beach.

The massive jetty reached nearly two hundred yards into the shallow water. It provided a perch for pelicans and seagulls, a haven for small fish, a barrier to beach erosion, and an effective deterrent to anyone who tried to enter within the limits of her grandfather's estate.

The other side of the large yard was also wailed. The front was walled against the quiet street. There was a gate of iron grillwork across the driveway, but the little guardhouse to the side was unoccupied, now that the lock and the motors that opened the gate were operated by remote control.

The grounds were immaculate and planted with lush islands of palms and tropical exotics. One island made a visual barrier between the street and the entire interior of the Sanderhoff estate.