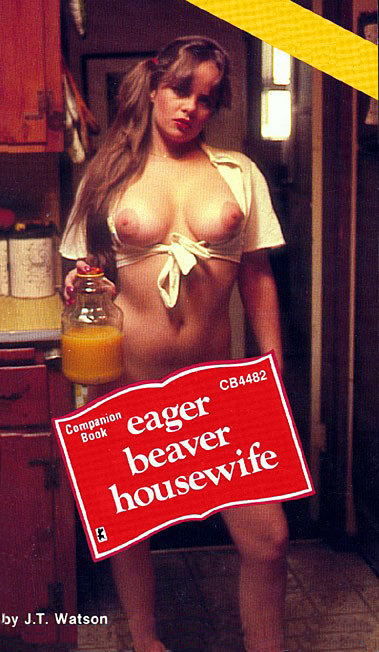 Janet Maxwell was in a great mood as she kissed her husband gently and walked with him out to his car. All over the subdivision, husbands were leaving for work, but Janet was sure that none of them were as good looking as Bob. Janet also knew that there were a few envious looks directed toward her. She was twenty-three and she was in almost perfect shape. Her ass was round and lush and she still wore her reddish-gold hair down to her waist in the same way she had when she was in school. This morning she was wearing a dark-green robe that clung to her figure and made her look even more sensual than usual.

"You'd better keep those boyfriends away while I'm gone," Bob teased as he got into the car.

"You know you're the only man for me," she said.

It was true – but she did feel a momentary pang of guilt, for what she was planning to do that morning. It wasn't like she was planning on being unfaithful or anything, but she also knew that Bob might not approve of what she had in mind.

It had started with an innocent conversation with her best friend, Peggy. Bob had just recently bought one of those video tape machines where they, could watch movies on television. Peggy had mentioned that her husband had a really spicy movie that Peggy always found exciting. It finally worked out that Peggy was going to bring the movie over after Bob left fat work, and they were going to watch it together.

Janet didn't know what time her friend was coming, but it turned out that she didn't even have time for a shower. She had started back upstairs when the doorbell rang. She went to the door and found Peggy. Peggy was also in her robe. She had on a blue robe that matched the blue of her eyes. Peggy was a tiny, good looking woman who was a little older than Janet and wore her black hair cut short. Peggy also had much different attitude toward sex and having a good time than shy Janet had. Peggy was willing to do anything and she often bragged about her conquests. Sometimes Peggy made Janet a little nervous.

"I'm not sure I should be doing this," Janet said.

"Come on, prude," Peggy said. "It's a dirty movie. I know you were raised not to look at such things, but this won't hurt you. I promise you that you'll enjoy it."

Peggy was already taking charge. She had pushed Janet into the living room and she had taken the videotape out. She was adjusting the machine. She got the movie started and then she sat down beside Janet on the couch.