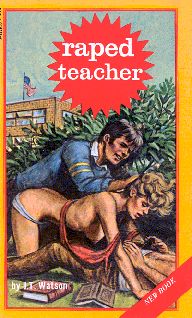 Erica Thomas dropped her keys and cursed loud enough for her neighbors to hear. She didn't usually curse, but this was just one of those days when nothing seems to go right. First, she had been late for class that morning. Then, she had trouble with some students and then the stupid faculty meeting that afternoon. Why did they have to have faculty meetings on Friday afternoons?

She finally got her key in the lock and opened her door. Her tiny apartment smelled musty. She was going to get down and really give it a cleaning one day in the near future. It just seemed like she was always so tired.

She put her books down and flopped down on her couch.

She knew it was not really the faculty meeting or the hard work lately that was bothering her.

What was really bothering her was a student named Tim Douglas.

Tim was one of the worst boys in school, and today she had found out just how bad he could be.

She had come upon Tim and Susan Clark at the back of the building just after school had ended. Tim had Susan backed up against the wall and Erica could see his hand groping underneath her short skirt. Erica was speechless. She knew she should step in and stop them, but somehow all she could do was watch.

Tim was kissing Susan. His lips were on her throat. Susan was moaning.