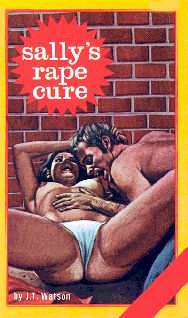 "Let's go down by the river and park, huh, Sally," Bill Stokes suggested. Sally Ryant sighed. It made no difference to her where they parked as long as he got his foolishness over with in time for her to make the dance early. Long ago she had decided that parking was simply an ego trip for the boys. They could go back and tell their friends that they parked with this girl or that girl, and then they would lie about how far they had gotten.

Sally had no intention of letting anybody get very far with her. A few kisses that she felt it was her duty to give, and then on to the dance. It wasn't fear that made Sally contemptuous about sex. Sally didn't give a damn about what people thought about her or her morals.

The truth was that Sally just wasn't interested in sex. She found the groping and panting distasteful and she only put up with it because she wanted to date Bill.

Bill was one of the more handsome boys in school and it made Sally feel good to be seen with him.

It was getting near seven when Bill parked the car in a little grove of trees down by the river. Sally was impatient to get the kisses over with. She wanted to make her grand entrance to the dance.

Immediately Bill pulled her into his arms.

Why did boys have to be like this? Sally asked herself. She knew that boys considered her sexy and she didn't really mind being thought of that way. She was a pretty, brown-haired girl with a full, lush body. She knew her bright blue eyes and her innocent expression made boys and men look at her with more than casual interest.

But why couldn't boys just be satisfied with looking? Why did they have to get so groping?

Now Bill kissed her hard and tried to push his tongue between her lips. Sally quickly drew her head back and gave him a look of disgust.