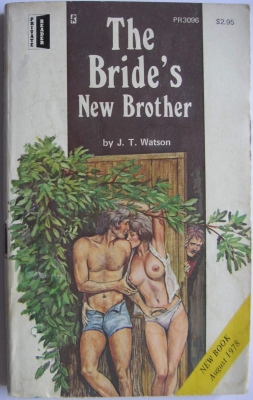 David Williams was stretched out on a comfortable bed and nearly asleep, when he heard a sound in the hallway outside his door. For some crazy reason David knew that somebody was coming to his room. It didn't surprise him. Crazy things had been happening to him all afternoon, beginning when Mark's wife had picked him up at the airport.

His brother's new wife was an absolutely gorgeous woman, not at all the type David had expected. Instead of a sturdy farm woman type with ruddy cheeks, he had found a woman, ten years younger than his brother, with laughing blue eyes and hair a golden color.

And her figure! Her big round tits, small waist, and perfect ass was enough to drive a man nuts. Especially a hot blooded male like David who had just gotten out of jail after serving two years.

She had worn a short, tan skirt and David had trouble keeping his eyes off the creamy thighs revealed every time she changed gear. He had been sporting a gigantic hard-on by the time they reached the farm and then Mark's daughter had come out to greet them.

Judy Williams had changed in two years. The last time he had seen her she was a gawky, skinny kid. Now she was a near woman and her figure was damn near as good as her stepmother's. The only difference was that Judy had raven hair and she wore it long, the silky strands nearly touching her pert little ass.

Judy had rubbed up against him and he had been a little ashamed that he could think of his brother's wife and daughter. But damn it, he hadn't even been close to a woman for two years. What could anyone expect?

And that hadn't been all the women in Mark's home. There had been a third. Marsha Cramer was a woman Mark had hired to help with the household chores. She was a little plumper than David liked, but she wasn't fat. She had a nice face. She looked like she was in her forties which would make her twenty years older than David, but David had never minded fucking older women. Some of the older ones he'd fucked were better than the young ones. They needed dick worse.

Nancy told him that Marsha was a widow, her husband died in a auto accident a year before. David wondered if she were a lonely widow.

Fucking Marsha might keep his mind off fucking Mark's wife and daughter.

Now he was lying on his back and someone was coming into his room. He was dressed in only his shorts because it was warm in the room. He reached down and pulled the sheet up to his belly. He wondered which one it was going to be.