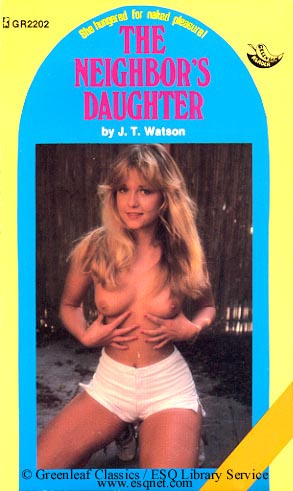 "I really appreciate your giving me a ride home like this, Mr. Fisher," Carol Banister said sweetly. "I know it's really out of your way."

"Nonsense," Judson Fisher said. "How could I refuse my favorite babysitter?"

Judson looked out of the corner of his eye at the dark-haired teenager who sat beside him. He thought that there were a lot of things he liked about his favorite, babysitter. The way her clothes always seemed to cling tightly to her ripe young body. Her round, shapely tits looked almost as bigaas his wife's, and she had an ass on her that made him drool every time he looked at it. The thing he liked the best about her was the way she always wore those dresses with the split up the side to show off her really long legs. Judson thought that she was perfect for fucking, but he was scared to try.

"I live just at the end of this next road," Carol said.

Carol was also thinking about fucking. She was sure that her thoughts would have shocked Mr. Fisher. She was a virgin, but that wasn't because she didn't like boys. But most of the boys her age just didn't appeal to her. It took a man like Mr. Fisher, a man with strong, work-worn hands and thick muscles, to get her juices flowing.

Carol had often masturbated while thinking about Mr. Fisher. She would close her eyes and picture him standing next to her bed with his clothes off and his prick as big as that one she had once seen in a dirty magazine.

She would picture the look in his eyes when he realized that she was going to let him fuck her, and it would make her so crazy that her fingers would go wild in her juicy pussy. But for Carol, it was only a fantasy. She was sure that nothing like that would ever happen.

"Is this it?" Mr. Fisher asked, as he turned the car off into her driveway. "It doesn't look like anyone's home."

"And your father?" Judson asked.