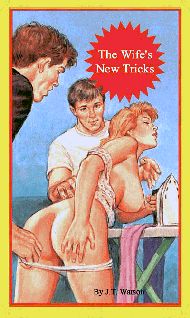 Caroline Murphy had many fantasies of what being a lawyer's wife was going to be like. She had visions of living in a beautiful home in the suburbs, of wearing beautiful clothes, and of constantly going to parties.

She found out different.

Being a young lawyer's wife meant struggling along with little luxury. Her beautiful home was a small, cramped apartment in the city. Her clothes were off the rack. She seldom went to parties. Her husband was usually working.

That was why she had been so surprised when Rick had called her from work and told her to put on her most gorgeous formal gown. She was supposed to attend an office party.

Her best-looking gown was a tight fitting green dress that was low cut in front and slit up one side almost to her thigh. She was proud of the way she looked with her jet black hair hanging to her shoulders and her pale green eyes matching her dress. She wore a string of pearls around her neck.

She knew she was gorgeous. She had been the best-looking girl in her high school and she hadn't changed much in the year she had been married. Her figure was still slim waisted, and her creamy tits threatened to break free of the top of her gown at any moment.

She giggled as she thought of what Rick would say when he saw them. Rick loved her breasts, except he didn't call them breasts. He called them tits. Caroline made a face in the mirror and then posed like one of those lewd models.

"That's some pair of tits you've got, baby," she said, using a deeper voice than her own. She started giggling again. She was still giggling when the doorbell rang.

Her first thought was that it was Rick, but then she wondered what Rick was doing ringing the doorbell. She quickly put on her high heel pumps and hurried down the stairs.

She was shocked when she opened the door. She had met the man standing there only a couple of times. She knew his name was John Richardson and she also knew that he was vice president of the law firm that Rick worked for.

"Mr. Richardson!" she gasped. "What are you doing here? I was waiting on Rick!"

"I'm afraid I've got some bad news for you, Caroline," John Richardson said softly. "Rick's not going to be able to take you tonight. I'm afraid it's my fault. Right after he called you I had some work for him to do. I'm afraid it's going to take quite a while. Most of the night, actually."