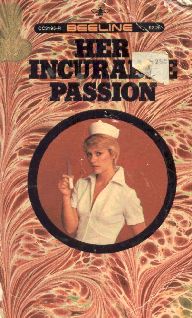 Kate lay there very quietly, letting her mind clear and gradually managed to identify her surroundings. After a few moments, she knew that she was lying on an examining table, though one that was slightly different from the usual model found in physicians' offices around the country. It had the same padded surface, of course, but the leg stirrups and foot rests were covered with soft, foam like pad that was very different from the customary cold, polished steel used for more orthodox models. She sensed that she was entirely naked under the crisp white sheet that covered her body from her neck down to her waist; she could see her bare thighs propped on the leg rests, which kept them well apart.

She was in a room lighted only by a big overhead light that cast a circle of illumination down onto the table so that the rest of the room was pitch black. After another moment she became aware of a figure sitting at the foot of the table. Without being able to see the person’s face, she intuitively knew that it was a man, one whom she knew and trusted. Comforted and assured by that knowledge, she relaxed. The man was sitting on the little stool gynecologists use while conducting pelvic examinations; his face was only a few inches away from her loins.

Kate relaxed even further. She enjoyed hearing her pussy being described, in the cold, clinical terminology used for medical examinations, just as she enjoyed having it examined; both experiences gave her an offbeat erotic charge that was usually highly stimulating. Gradually she became aware of warmth that pervaded her loins. She could feel her pussy’s inner lips growing larger as the sensuality became stronger and more localized between her thighs; she could also feel her nipples hardening against the covering sheet, which provided them with a gentle but definitely stimulating friction. She knew that the minute glands at the entrance of her cunt were working now, producing a gentle flow of that clear, slippery lubricant signaling another stage in the development of her sexual arousal.

For years Kate had found a very real kind of pleasure in watching her pussy change while she ruminated through her storehouse of erotic fantasies. She often spent long periods of time on her bed, naked, with a makeup mirror planted between her thighs in order to watch the subtle changes which came over her cunt as the fantasies worked their powerful magic on her body. She thus knew exactly what the physician was seeing and had no difficulty in visualizing the changes he described. She knew, for example, that soon he would be able to see the tiny trickle of clear lubricant emerge from the wrinkled inner lips of her pussy, oozing out to run down the channel between her hips, over her tautly puckered anus, and further down between her trimly fashioned buttocks. He would know what the appearance of that liquid signified, of course, and would draw the correct conclusion from it.

“Patient is now lubricating moderately,” the examining physician intoned, continuing the report which was being transcribed onto a tape recorder. “Inner labia are now significantly larger, also perceptibly darker in color. Scent is clean, biting, and quite penetrating.”

Kate’s sharp hearing detected a different timbre in the man’s voice as he recorded those changes. She sensed that he was responding to the visible evidence of her sexual excitement and becoming aroused himself. This shift in his speech warmed her heart, since it afforded her tangible evidence of his ability to respond to her, and she felt her body becoming progressively more alive with erotic feeling. Despite his evident interest in her as a woman, rather than just as a patient, he refrained from touching her in any way, though she was extremely aware of his closeness to her naked, throbbing loins. Having him there so close, so intimately involved with her sexuality, but maintaining the space between them, managed to arouse Kate even more than would a direct touch, she believed.

Somehow the outer lips of her pussy parted wide enough to bring the inner lips into full view. She did not feel his touch and she was certain that he had not used an examining instrument to part the folds of sensually tingling flesh, but nevertheless she was now certain that the outer lips were now spread very wide. She could hear him dictating a description of her pussy in that condition and she detected an even more pronounced note of interest in his voice.

Kate had no doubt that her pussy was at least as attractive as most women’s. One of her former lovers, a photographer, had showed her a very large collection of color slides he had assembled, all devoted to capturing in intimate detail the glory of women’s sexual organs. She had examined the collection assiduously and had come to the conclusion, one with which the photographer agreed, that her pussy was a match for any of the ones she saw on the projection screen. Other men had corroborated that judgment, as had the few women with whom she had had sexual encounters.