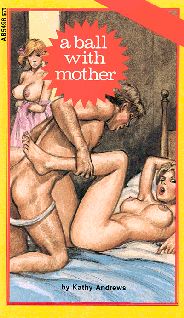 A ball with mother

A ball with mother

Marla stood with her feet parted, looking down.

This was something she had done as a small girl, something that had excited her then and excited her now. In the hand mirror on the floor, she could see the way her panties fitted her crotch. She could see the slight bulge of her cunt, the little indentation as they pulled into the split of her rounded, swelling ass.

When as a girl, she found she could see the bulges in the front of boys' pants, she went through a period of staring openly at them. Those mysterious bulges occupied her attention for a number of years, then she went through a stage of ignoring boys, and looking at the girls. In high school, when the girls stripped for gym, Marla had felt an almost overpowering urge to touch the girls, to feel their saucy tits, caress those pretty asses, and best of all, feel their fuzzy pussies.

Looking down at the mirror, Marla slipped her hands under her skirt and adjusted her panties, exposing her softly curling dark cunthair. Her excitement increased as she gazed at her reflection.

Marla was almost out of high school she experienced her first fucking. She had been eager for it, very eager. Being popular with both boys and girls, she could have dated much earlier, but Marla had been afraid. Not of the boys, but of herself. She had been afraid to be alone with a boy, afraid she would be unable to control herself, that she would grab those lovely bulges without warning.

When she finally consented to go out with a popular young man, she had managed to control her urges, to a point. She had pot grabbed his cock as she had desperately wanted. At least, until the teen placed a hand on her tit.

That was all it took. Marla had melted immediately. She pressed the teen's hand hard against her tit, and tilting her mouth to his for a kiss, moved her hand to his cock. The first feel of a throbbing, hard cock had caused her to come, and she had squirmed her mouth against the teen, mewling as her cunt went through a series of contractions, gripping his cock through his pants. By the time the guy had his cock inside her cunt, Marla was almost out of her mind. She thrashed and churned beneath the guy in the tight confines of his car, screaming and shrieking with more ecstasy than she knew there could be. Her cunt had throbbed into orgasm again as soon as his hard cock penetrated her cunt, and the contractions kept going constantly as the guy fucked frantically, pounding his cock into her gripping pussy.

He had told all his friends what a wild fuck Marla was. Most had trouble believing that the exceptionally beautiful girl was such a hot one, but the guys did start pressing her for dates. But Marla, afraid of her own sexual responses, almost became a recluse.