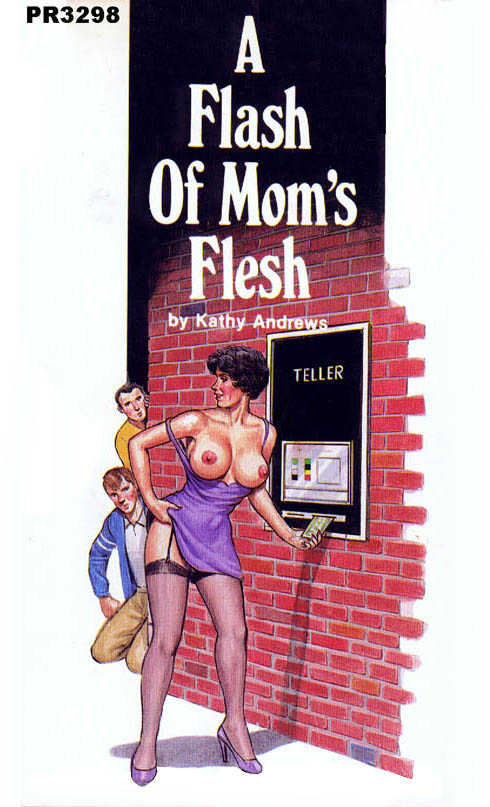 A flash of Mom_s flesh

A flash of Mom_s flesh

After getting the money from the instant teller machine, Sarah felt an irresistible impulse to lift her dress.

It was night, but the front of the bank was well lit, and the parking area of the shopping center was filled with cars. She looked around, a flush on her face, a flush of embarrassment and excitement.

Why she had this sudden urge to lift her dress and expose herself, she didn't know. She had never wanted to do that before. Her hands shook as she stuffed her money into her purse. She stood a moment, facing the machine, eyes closed as she breathed deeply. Her hands trembled on her hips and thighs, and her fingers began to inch her dress upward. She was afraid to turn around, afraid she would be face to face with someone watching her. Yet she continued to lift her skirt, slowly. When it was an inch or two above her knees, she felt a burning wetness inside her panties. The lips of her cunt seemed very swollen suddenly, and her clit had become very hard and sensitive.

Without turning from the instant teller machine, Sarah inched her dress higher. She was hardly breathing, not understanding why she couldn't resist doing this wicked thing. Her dress was halfway to her hips now, and she was still raising it, slowly. The cheeks of her ass bunched as a fiery quiver swept through her cunt. The sensations were very much like an orgasm, only she didn't come.

"Oh, God!" she whimpered softly, feeling the cool night air on the backs of her thigh, then her pantied ass. She stood holding her skirt about her waist, her skimpy panties displayed. She took in a deep breath, a shudder of wild, strange excitement coursing through her.

Her dress was high in front and back, the frilly panties exposed, her cunt making a mouth-watering bulge in the tight crotch.

That was when she saw Jimmy, her son in the car, with Keith his cousin, at his side.

And they were staring at her, eyes wide and mouths open.

The flush on Sarah's face deepened, and she felt as if she wanted to cry with embarrassment, yet she held her dress around her hips, and started walking toward the car. Still holding her dress with one hand, she opened the door and slid under the wheel, with her son and nephew staring through the other window at her. She sat with her dress around her waist, her long, sleek thighs gleaming in the harsh light, her hands gripping the steering wheel as she stared straight ahead, her face on fire with embarrassment.