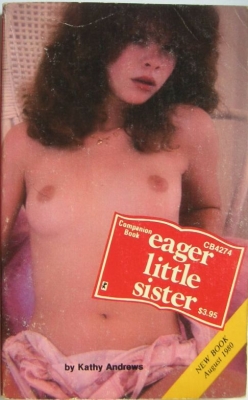 Judy Stone stood on the second floor landing, looking down over the crowd of boys and girls as they ate lunch.

It was a lovely, warm spring day, and most of the students chose to eat outside in the student center. Somehow, Judy was not hungry, and her lunch remained in her locker. She had not been very hungry the past few days. Her mind had been and still was on other things, more exciting things.

Beneath her were two boys, two boys she had seen only a few days ago. She knew them, of course. One of them she knew very, very well. Their names were Robert Mason and Rick. Rick was Judy's brother. He was only a year older than her, but always seemed to know so much more. Not that he was wise or anything like that. He just seemed to know the answers to things she didn't.

Judy idolized Rick. She loved him deeply and there was nothing she wouldn't do for him. Fortunately, her brother never took advantage of her worship. That is, he didn't in some derogatory manner. He had always treated her nicely, never arguing with her. And Judy was somewhat jealous of his popularity with girls.

She had always been jealous of him, wanting him to herself, but she knew that that could never be. She wondered about her feelings for him often, and she felt it could be wrong. But wrong or not, she could not deny her feelings. All she could do was conceal them.

Judy did not know Rick and Robert, his best friend, were underneath the stairs where she stood. And she was not really seeing the boys and girls below. Her eyes were open, but they held a vacant expression. It was what was in her mind that caused this vacant expression.

Not quite a week ago, after school was out, she had almost stumbled upon Robert and Rick as she walked past the dumpsters in the back of the school grounds. She had not seen them in the beginning, only heard voices. At first the voices made no sense to her, then a few words came loud and clear.

For a moment, startled, she didn't under stand. The next word she heard caused her to gasp with full understanding. Fucking!

Judy stopped in her tracks. A warm flush spread over her face, a flush of embarrassment. She glanced about but saw no one. Wondering where the voice came from, she glanced at the trash receptacles. They were pulled perhaps three or four feet away from the wall of the building, and garbled whispers came from that direction.