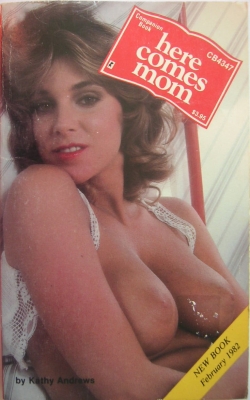 Donna stood waiting near the chain-linked fence as the commuter plane screamed in for a landing. She felt the anxiety building within her slim body.

It had been nine months since she had seen her son, Paul, and she knew he had grown in that time. She waited with anticipation as the plane taxied to a stop about a hundred feet away. After him being with his father all this time, she would now have him for the summer.

Dressed in a white pleated skirt, a cream colored blouse, with nylons – not panty hose and high heeled shoes, she knew how tantalizing and delectable she looked. Donna was a very attractive woman. Her almost-black hair was loose and was allowed to blow in the slight breeze, and her dark-brown eyes sparkled with excitement.

Men standing nearby looked at her from the corners of their eyes, some openly. They speculated on her beauty and desirability. Her tits thrust out sharply into points beneath her blouse, obviously indicating her pleasure at not wearing a bra. Her nipples could be seen boldly outlined, slightly dark beneath the light-colored blouse. Her skirt, although flaring with the sharp pleats, was still tight enough about her hips to reveal the teasing swells of her shapely ass the high heels on her feet emphasized the curves of her legs.

Her heart began to beat faster with excitement as the doorway swung down. A few men climbed off, a woman, and then she saw her son.

"Paul!" she called, waving and dancing about. "Here I am, darling!"

When her son saw her, his face split in a huge grin of pleasure as he lifted his hand to wave to Donna could not wait for him; she darted through the fence and began to run toward him.

A sudden, unexpected gust of wind tugged at her skirt, then a devil wind lifted it. Donna's white skirt went high, billowing above her slender, creamy, smooth thighs. The skirt seemed to pause halfway up, then the power of the wind sent it flying past her head.

Donna felt no embarrassment. She paused as she fought the skirt down. But that brief time her skirt had been over her head, the men at the fence had seen the sweetness of her shapely, swelling ass, totally naked. The loud whistles of appreciation caused her to smile. As she smoothed her skirt down, she saw that her son had stopped walking toward her. She knew Paul had seen her hairy cunt, the dark curls of her pussy hair and the garter belt. He seemed dazed.