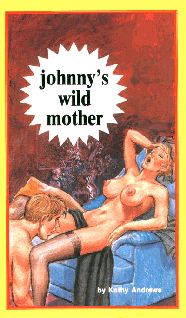 Lisa squirmed, trying to be unnoticed.

Her panties felt tight, much too tight.

It was not the place to start feeling hot, but she had no control over it when it happened. Fortunately, she never felt this way all the time, but it was happening more often. She didn't really have much of a problem when aroused; usually she managed to give relief to herself by some means. It would be easier if she would allow herself to be picked up in a singles bar.

But Lisa hated those encounters with a passion fucking some stranger was not very satisfying. All they wanted was a hot, wet place to put their cock, and Lisa wanted a relationship as well. Those slam-bang fucks made her feel dirty and sluttish.

There were lots of men available, but none of them wanted anything to do with a woman who had a son. They would be happy to date her on a permanent basis, spend the night with her two or three times a week, but Lisa didn't want that sort of relationship, either.

And then there was one other thing. Lisa wasn't satisfied with routine sex. She wanted it wild, uninhibited, and not always in her bedroom in the dark.

She paused near a small jewelry store in the mall, peering at the window display, the cheeks of her ass bunching by their own volition. It felt as if not only had her cunt become swollen, but her ass as well.

When she began strolling again, Lisa found herself eyeing the few men shopping during this mid-week day. Her eyes moved over their bodies, seeing their naked, delicious cocks swaying in movement, hot, full balls exposed. She looked secretly at their asses, trying to imagine how they would feel cupped in her hands.

Lisa would not have had any difficulty picking up a man. Tall and slender, almost in a fashion-model way, she had tits that strained outward, standing high on her chest. Her brunette hair gleamed from many brushings, and her blue eyes held a sparkle. She was a very lovely, very attractive female.

Her pleated white skirt swirled about her exquisite thighs as she walked, her pale pink blouse an attractive compliment. The pink high heels emphasized the length of her legs, and her rounded ass looked mouth-watering.

She tried to tell herself no decent girl, no decent woman, no decent mother, would have such thoughts – but the wild, wicked thoughts and images were always there. She had never thought of herself as a voyeur, but her mind was like a window through which she watched strangers fucking and doing exciting things to each other.

She stopped to look at a display of spring fashions, frowning at the colors, wondering what sort of crazy designer came up with such bland colors.