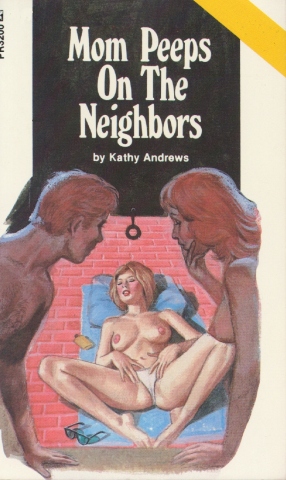 Mom peeps on the neighbors

Mom peeps on the neighbors

Susan Fox saw her son looking out the window.

She had come past his room and looked in, and there he was. She had seen him looking out the third-floor apartment window a couple of times before, and she knew what he saw.

After watching his intent face for a moment, she went to her room. From there, she could look almost directly down into the enclosed patio where the girl was.

As before, the girl was lying there naked, her pink nipples standing up on the white mounds of her tits. The dark triangle of her cunt was clearly visible. Although an open magazine rested over the girl's face, Susan knew it was a beautiful face; she had seen the girl often, spoken to her, greeted her.

Mary, a sweet name, an innocent name, Susan thought. And at the same time, a bit old-fashioned. Not many girls were named Mary any more. And Mary was just about twenty or twenty-one. The name, which suggested sweet innocence, tit the girl, Susan thought. Mary did look sweetly innocent, and yet she always sunbathed naked. Just how innocent could she be?

Surely Mary knew people could see her from the upper floors of the apartment complex. Most of the windows were draped, and many of the residents were at work, yet it was possible others besides Susan and her son were peeking. And Mary didn't seem to mind in the least.

As Susan looked down, Mary shifted position. She turned onto her stomach, and the swelling sweetness of her naked ass was presented to view. Mary's ass was tightly rounded, with a deep crack between the cheeks. Even at this distance, her flesh appeared like rich cream, with the texture of satin or velvet.

Susan wondered what her son was thinking as he looked down upon that beautiful young girl, seeing those tight, flawlessly shaped tits, the thick dark-blonde cunt hair, and now that attractive, tantalizing ass with those beautiful long legs. She wondered if his cock was hard, if he was dreaming of putting it into the girl's pussy, of fucking her.

A tremble seemed to shudder through Susan's body, and there was a strange, tight heat swelling between her thighs, and then the twitching of her cunt started. This had happened once before when she had looked upon the sunbathing girl, but Susan thought it was from her many years of not feeling a hard, throbbing cock fucking into her cunt. Some how, this time, she sensed a difference. The heat, had started as she wondered what her son was thinking, and she had a vivid image of Bobby's cock fucking into that girl's pussy.