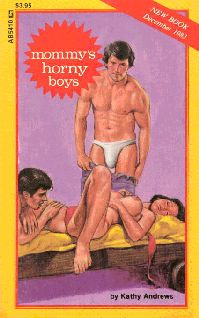 Joanie sat on the lounge near the pool, knowing they were looking at her.

Her brief bikini concealed hardly anything, but that was the way she wanted it. Leaning back with her eyes closed, auburn hair loose about her shoulders, her slender body glistening in the sun, Joanie was beautiful. They weren't the only ones looking at her, Joanie knew. Many people looked at Joanie, men and women. But she wasn't interested in any of the other tenants of the apartment complex.

Joanie's rounded, up tilted tits strained at the halter, even though she was leaning back. The soft under curve was visible, somewhat whiter than her golden tan. Her waist was small, then rounded out to lovely hips that flowed into long, sleek, graceful thighs and curvy legs. Her feet were parted at the end of the lounge chair, pointing toward the window of her apartment.

Inside, Joanie had covered the window with a plastic sun shield. You could see out, but not in. Before the window stood Gary and Randy, her two young sons.

They were looking at their mother.

She knew they were looking at her.

They enjoyed this small game.

Joanie knew but her sons didn't know she was aware of them looking at her. Joanie loved to be looked at by her sons, it made her shiver and tingle all over. Everyone else in the apartment complex was at work. She and her sons were the only ones home.

Joanie's bikini was bright red, a sensuously sexy scarlet. The small triangle covering her cunt was hardly adequate and the fabric bulged out with the puffy lips of her cunt. Shifting her rounded, tight ass, she let her feet drop over the sides of the chair, exposing her crotch.