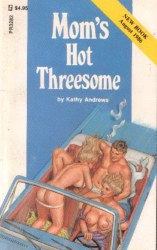 The sun, coming through the windshield of her Mustang convertible, sent thrilling sensations throughout her body. It was difficult to drive when she was aroused. Her thighs felt hot and her titties became hard. The tingling between her thighs made her want to press them together, to rub and twist, feel the pressure upon her cunt and clit. She felt the crazy desire to open her blouse, let her tits be free and deliciously naked.

She would, she thought, if not for her son and daughter sleeping in the back seat. There was the possibility one of them would wake up and see her. She had slipped her skirt almost into her lap, letting the sun hit directly on her thighs. It felt good, very good.

There was little traffic on the highway. It was early afternoon, and lunch was over an hour ago. She could drive for three or maybe four more hours before they would stop for the night. It was pleasant to drive in the warm afternoon, with the sun on her body, in the quietness of the car with the radio playing softly.

Glancing back at her son and daughter, she smiled. Every summer they spent with their father created a loneliness in Peggy, a loneliness that lasted until she picked them up a few weeks before school began. She was always happy to have them back. Her son, Ricky, looked so handsome as he slept, with his brown hair in his eyes. He was growing up, she realized, getting to be quite a big boy. Still boyish, with all those mysterious things that young boys were interested in, Peggy wondered if her son had discovered his cock yet. She wondered if he had discovered he could do things with his cock besides piss with it. The image of her son, his cock hard, fist wrapped around it, jacking off happily, made her smile. She wondered if he was getting hair on his little balls, and then found herself wondering what his young balls looked like.

A soft moan came from her as she felt a puckering of her cunt. Her clit seemed to be straining with hardness now. Sliding her left hand from the wheel and to her lap, she felt her pussy. The nylon panties were getting moist. Smiling as she drove, Peggy rubbed lightly upon her clit, opening her legs.

The urge to shove her hand into her panties and fondle her silken cunt-hair, to slide the edge of her finger up and down her now-rigid clit, was very strong. Glancing down, she saw her nipples protruding against her thin, white blouse. This close, she could see the darker circles of her nipples through the blouse.

Lifting her hand from her cunt, she opened the two upper buttons, seeing the creamy swell of her tits now. Slipping her hand into her blouse, Peggy caressed her tit, cupping the firmness, giving herself a gentle squeeze. She thumbed her nipple, making it tingle sweetly. With an impish giggle, she pulled one side of her blouse open, exposing her tit for a brief moment, wondering what someone would think if they happened to pass at just that time.

They would think she was a lone woman in a car playing with her own tit, that's what they would think. She giggled again as she covered her tit. The soft moan from the back seat caused her to glance into the rear-view mirror. She saw the blonde head of her daughter.