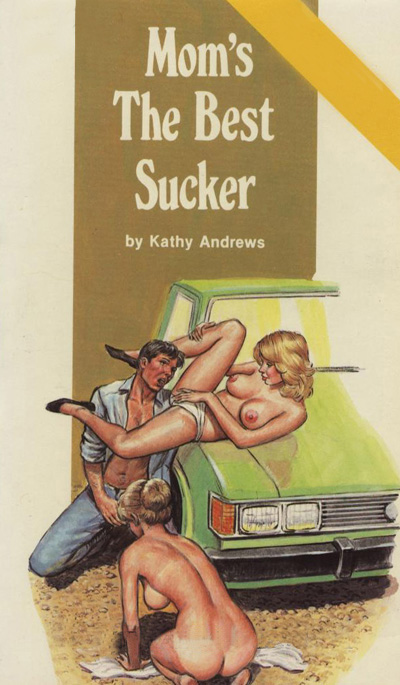 Carol Taylor lifted her feet and placed them on the back of the front seat. The open convertible allowed the full heat of the sun to burn on her already-golden flesh, her dark-blonde hair flying back from her head.

The car wasn't moving, but parked in a clump of trees.

There was no one else with her. She liked being alone, but not all the time. Sometimes she liked being with someone, but she had no one to be with. Not now, since her divorce. She had her son, Roger but he was still a little boy and besides he had his own friends.

Resting her head on the back seat, she closed her eyes and allowed her mind to drift as it usually did when she was alone. By herself, she could pretend, act anyway she liked. She would not be disturbed here in the pine forest, and she could allow her fantasies to run free without fear of being caught.

Carol loved to fantasize about fucking and sucking. It excited her, made her beautiful tits swell in hardness, caused her nipples to burn and tingle so deliciously. She enjoyed the pulsing heat that would start between her long thighs, grow with intensity until her cunt was juicy and dripping, her clitoris bulging with that sweet pleasure-pain. Then, when her cunt was thoroughly juicy, she would let imagination grow wilder, pretending she was being fucked by two or more men, at the same time, or one after the other.

Feeling the sun on her bare legs, she pulled her yellow skirt past her knees, looking at her legs. They were shapely legs, long and slender and the skin so smooth they were unbelievable. She was very sensitive along the inner surfaces, and loved to feel herself there. With her eyes slitted, she watched her hand move slowly from one knee up her thigh. She caressed herself with a light touch, feeling shivers flow through her. She pulled her skirt to her lap, exposing the crotch of her panties. The bikini panties were not designed to be functional, but to arouse.

She enjoyed wearing soft, frilly, sexy clothing, and always chose her panties with extra care. She told herself she never knew when someone would turn her on. When that happened, she wanted to be as sexy looking as she could.

Drawing her fingertip along her thigh, she sighed softly.