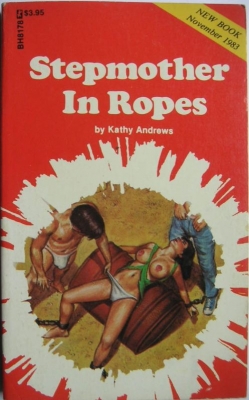 Lynn sensed the boys didn't like her from the beginning. It wasn't a hatred she felt, but more a dislike. Before she married their father a few months ago, they had seemed to be good boys, always polite with her, even showing some affection.

The marriage changed all that.

In the past month, Lynn had helped get them out of trouble with store owners, stores they had shoplifted from. So far she had managed to keep them away from the hands of the authorities by paying for the items they had stolen, talking the managers out of pressing criminal charges. Until now, she had not told their father, wanting to prove to herself she could handle the little devils.

She had not realized the problems she would have the day she became their stepmother. The problems began a week after the wedding. She had been called to school for a talk with the principal about the increasing truancy of the brothers. She learned at that time Billy and Tony had been in trouble often throughout the year. At first the school authorities did nothing, believing the boys were a displinary problem because of grief over their mother, who had passed away in the last year. But their delinquency progressed until they were caught in a restroom with a young girl.

Lynn was shocked to learn the boys had been attempting to rape the girl. Billy, a year older than his brother, had removed the girl's panties while Tony stood by playing with his cock, trying to get the girl to hold it.

At first Lynn thought about telling Jake, her husband, and letting him handle it, but she thought better of it. She wanted to show him she could take the troublesome boys under her hand and control them. Besides, Jake was deeply involved with his job, getting ready to make a swing through four states, visiting the company's plants. It was a trip that would take at least a month, and Lynn wasn't looking forward to being alone, knowing she would have troubles with the boys.

As troublesome as they were, Lynn loved them. Young boys could be rambunctious and filled with piss and vinegar. She had brothers who used to torment her day and night, so she knew what monsters boys could be.

Lynn was younger than her husband by ten years. She had gone to him a virgin, knowing nothing about sex. Sheltered most of her life, she found on her wedding night a new discovery. As much as she had thought of being fucked, yearning for it, it had been a disappointment for her.

Lynn was always passive when he fucked her, which seemed to be every night. She lay on her back, feeling him plunge his cock into her cunt with hardly any regard for her at all. He plunged a few times, then came, filling her cunt with that horrible stuff, made a few groans, then rolled off and turned onto his back, snoring almost immediately.