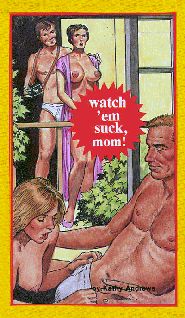 Janice looked good in the short skirts that seemed to be coming back in style. With her slender figure, her exceptionally long legs and tight, rounded ass, she wore them for the express purpose of exposing her beautiful thighs. Her tits were high and spaced just wide enough, nipples tilted and thrusting. Her tits were rounded firm, and satiny textured. Her waist was small, and her hips deliciously rounded. Her ass bunched and twisted when she walked, a natural motion that teased aid invited. Her copper-colored hair gleamed with golden highlights in sun, and her green eyes seemed to hold a sparkle of mischief. Her full mouth and moist lips always had a quick smile of greeting.

Beautiful and friendly, Janice was a seething sexual woman. She had been married once for a short period of time to a man who abused her. The only good that came from that brief marriage was Tony, her son.

She loved her son dearly, but lately had been avoiding him as much as possible. Just being with him, in the same room, made her tremble and shake, unwanted thoughts of incest in her mind.

Being honest with herself, she knew she tempted Tony by wearing the short skins and dresses. She knew he peeked at her when he felt she didn't know. She knew he was excited by her body, and she suspected that Tony jacked off in the privacy of his room at night. He carried pictures of her in his wallet and had photos of her in his room.

What Janice did not know was that flu son had a picture or two of her that showed her panties, and one of which she was unaware he her skirt dress up, and her pantied ass exposed. If she had known, Janice probably would not have said anything.

She and Tony lived in a nice two-story home, with the bedrooms upstairs. The house next to them was also two stories, with the bedrooms facing hers. She didn't know the family that lived there, although they had lived there for over a year. She knew them well enough to nod a greeting, but that was it. She had a hunch the woman was cheating on her husband. Janice felt sorry for the husband and little girl, but it was none of her business.

Tony was friends with the girl, Nancy, but felt she was too young to be seen with him in public. Tony and Nancy talked across the wooden fence separating the back yards, and they sometimes sat in the yard and discussed things boys and girls of that age did.

Nancy was a lovely little girl, with honey blonde hair and a sweet, creamy complexion that tanned well. She had big blue eyes, somewhat sad-looking, but she smiled a lot. Her soft hair was usually in twin ponytails, making her appear even younger than she was. Nancy had a soft voice and was a very quiet little girl. Yet when she laughed, it was a melodious sound that showed her delight with everything around her.

Upstairs in her room, Janice undressed, preparing to take one of her long, afternoon baths. She loved to bathe, and she used oils and scented soaps. She had stripped down to her panties when a movement in the bedroom window across the hall caught her eye.

She gasped when she saw the wife next door move into view. The woman was naked her tits pushing outward, with a thick patch of hair around her cunt. The woman stood near the window, stroking her body, caressing her tits, pulling and twisting her nipples, and talking to someone. When that someone came into view, Janice recognized him as one of the more frequent male visitors.

The man had his pants on, but his cock pushed out with hardness. Janice watched as the woman's hand lowered and cupped the man's crotch as their lips met. Janice felt a response between her own thighs, she moaned softly as she stared. Her legs trembled weakly as she watched the woman's fingers open the man's fly, and another moan came from her when she saw the man's hard cock come into view.

Janice's hand slipped between her thighs as she watched, breathing heavily, eyes glowing with inner passion. She licked her lips as the woman stroked the man's cock, back and forth. The man cupped the woman's ass in both hands. Janice moved her other hand behind her body, cupping her own ass. She pressed her palm hard at her cunt, feeling it pulsate, feeling wetness seeping into the crotch of her tight bikini panties. She began to rub at her cunt, unable to stop, excited by what she was seeing.