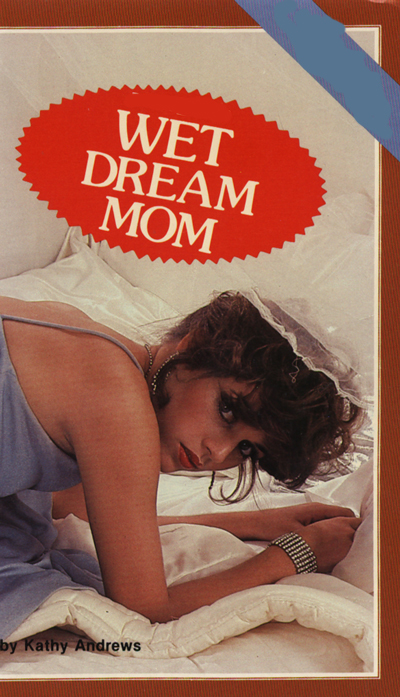 Peggy sat on the toilet, her legs spread as wide as they would go. Leaning against the water tank, she caressed her slender thighs, running her hand up and down the smooth, creamy flesh. Her skirt was bunched about her small waist, and her tits strained at the front of her blouse. The top buttons of her blouse were open, and the creamy swells of her tits appeared ready to overflow the confines of her bra.

She was in her own bathroom, the one adjoining her bedroom. As she struggled with her decision, she carefully avoided looking at the small hole in the wall. On the other side of the wall, she knew her son, Joey, was peeking.

She had noticed the hole immediately a week ago, and at first she had been angry, but not very much. Then she decided it was fun, exciting. If Joey wanted to peek at her, she knew he found interest in her, in her body. Besides, she didn't have to let him know she was aware. That way, she could do what she wanted, show what she wanted, and Joey would not know she was doing it on purpose.

So far she had not shown him anything but her legs, her panties. When she used the toilet, she made sure her skirt was over her knees. He had seen her tits, she was sure. He had a straight line to the bathtub as well as the toilet. And Peggy bathed every day, sometimes twice a day.

The decision she was trying to make was whether to piss into her panties or not. The fact that her son could see it excited her. The urge to piss into her panties had been with her for a very long time, longer than she cared to remember. Why she wanted to, she didn't know. Why she had tried before and couldn't, she knew. It was supposed to be wrong, perverse. But Peggy couldn't understand why that was so. She couldn't understand why anything a woman wanted to do in privacy was wrong. If it felt good, and didn't harm anyone, Peggy just didn't understand why it was wrong.

But she wanted to.

She wanted to piss into her panties badly, so bad it was about to drive her up the wall. Yet, something always held her from doing it. She knew most of it was due to the way she had been raised. Anything sexual had been taboo, forbidden, to her. She could not talk about it to her mother, or anyone. Due to her suppressive home atmosphere, Peggy had not enjoyed fucking. That, she felt, had been the direct cause of her divorce, nothing else.

Her husband had been a passionate man with an erotic mind. He loved to try various positions and methods, and she just couldn't get into it. She was embarrassed and shy, and her husband seldom saw her completely naked. The few times he had seen her that way, it was because he wore her down with his pleas. Then Peggy would try to hide her blushing face from him, burrowing into a pillow, feeling the shame burn from head to toe. All she felt when he fucked her was a fullness in her cunt, and when he licked her pussy, she felt nothing but embarrassment.

Never had she enjoyed getting fucked.