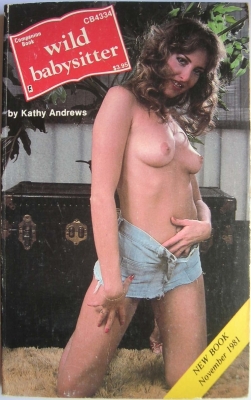 Kathy sat on the straight-backed kitchen chair, her hands tied behind it and her feet to the legs. She felt very apprehensive.

Robert and his sister, Cindy, danced and war-whooped around her. She did not like her position, but there wasn't anything she could do about it. The thin ropes they had used were tied, and she could not get loose.

Already, her skirt was up too high.

For Kathy, this was the first time she had seen Robert and Cindy. She hardly knew their mother, and she had only nodded to their father until he had picked her up to baby-sit the kids.

Her trouble had started within minutes after their parents had left.

Robert had stood looking at her, his sister peeking from behind him shyly. "We don't need a babysitter," he had said belligerently. "We're too old for that."

"Maybe you are," Kathy replied. "But your parent's asked me to sit with you, and that's what I'm doing."

Kathy simply looked hard at him. "You're sexy," he said, still trying to get a rise out of her.