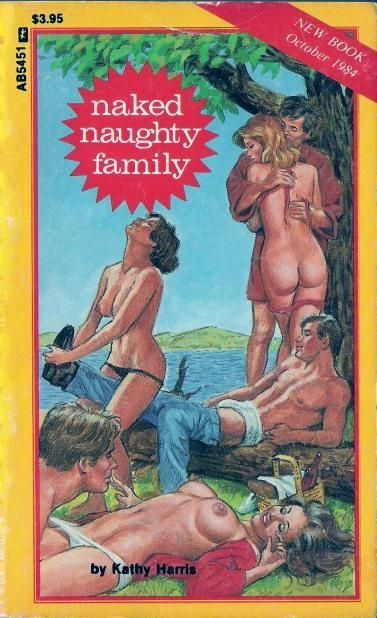 Steve Newman, Kay's younger brother, pulled his swollen cock out of the confines of his trousers and squeezed it tightly with one hand.

Watching Kay through the crack in her bedroom door, he saw her stretch out nakedly on her bed. Her large tits jiggled lewdly as she reached down and stroked her nipples. They immediately hardened beneath her fingers, and the large reddish circles puckered up.

Steve groaned softly thinking that his sister had the biggest, sexiest tits he had ever seen. He thought of sucking on one of Kay's firm nips. He could almost taste her tit, and his prick stiffened even more. He loosened his grip on his prick afraid that he would come too soon.

This was the third time the teenaged boy had jerked himself off while watching Kay strip and wriggle her tits and pussy in front of his eyes. The first time, he had come as soon as he had caught sight of the girl's dark, soft triangle of pussy fur, cradled between her pink thighs.

Inside her bedroom, Kay cupped her tits, one in each hand, and then began to run her palms over her flat tummy and on downward toward her aching cunt.

Suddenly, she stiffened and sat up in bed. There it was again… a sort of muffled sound from the hallway. This time she was sure about what she had heard. She smiled, suspecting that the sound was coming from Steve. She knew he had spied on her before, and that he must be spying on her again.

She had taken her brother for granted all these years, but she had been noticing him more lately, ever since the first time she had heard a muted groan outside her door, the night she had spread her legs wide and her brother had blown his wad.