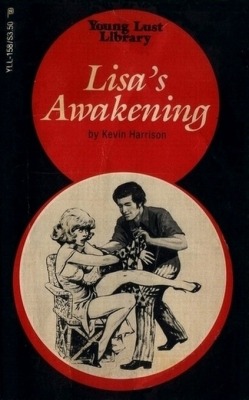 Paul Evans was setting at his desk in his apartment thinking about work when he glanced out the window and first noticed the little girl by the swimming pool in the courtyard.

The computer program he was working on had a bug in the feedback system, and his desk was strewn with papers, all but burying a compact desktop calculator. On a pedestal to his right stood an electric keyboard computer terminal, hooking him directly into a big computer at a research center a few miles away.

He carefully punched a complex formula into the calculator's memory storage, and then he found himself again staring out the window at the little girl by the pool. She was wearing a skimpy yellow bikini.

She looks a little young for you, Evans! Paul chided himself. Can't be more than twelve or thirteen!

But there was something about the slender child that held his attention, and he watched her step out on the diving board. Honey blond hair swung straight almost to her round little ass. Her face was a delicate oval, her button nose still almost a little girl's. Her eyes were large and accented with long lashes, and Paul guessed they would be blue.

Paul thought her body was absolutely beautiful. Her little breasts were just beginning to curve the top of her suit, and Paul thought he could just make out the shape of her little nipples through the cloth.

Her legs and ass already had the shape of a woman's, but more slender. The cheeks of her little ass were well rounded and had a saucy little bounce to them when she hopped up and down on the diving board. Her thighs were slender and well tapered.

She turned around on the board, and Paul looked where the tight bikini panty lewdly stretched across her little pussy. The mound of her pussy was just beginning to swell to maturity, not yet as full as that of a grown woman. She lay down on the diving board, stretched out in the sun, and her legs were spread just enough for Paul to see the bright yellow bikini stretch tightly between her thighs.

Jail-bait! Paul said to himself. And I should be ashamed of myself? A thirty-five year old man leering at a little girl! Next thing you know, I'll be out in the park in a dirty raincoat!

Paul made the desk computer read out the formula he had just programmed into it, and started a series of calculations based on the formula. He was copying figures from the camp titer readout to a flow-chart when the phone rang.