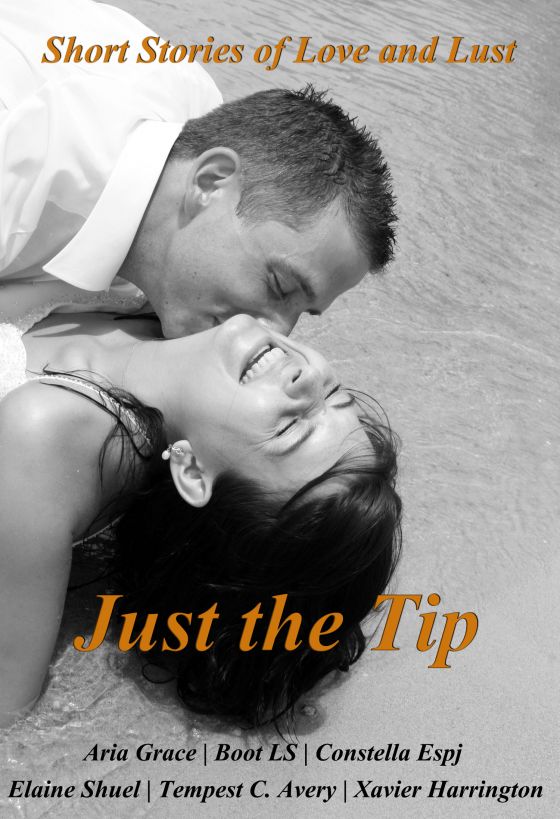 Just the Tip: Short stories of love and lust

Just the Tip: Short stories of love and lust

Working late is never fun but when you have to do it on Christmas Eve, it’s downright depressing. I was there partly by choice and partly by circumstance but as the hours ticked away, so did my cheery disposition. Since my parents ditched me for a white Christmas in New York with my brother, I had no reason not to spend the entire month of December working my ass off trying to meet an unrealistic deadline. No one else in the office seemed concerned about it but they must have known that I’d get the work done since I had no family in town and no social life to speak of. Hooray for me.

The heater kept kicking in and the flicker light of my computer screen was giving me a headache so I stepped out onto the second floor deck for some air. The office building that I work in shares a parking lot with a motel that caters to the businesses in the area. It looked fairly deserted until a light across from me flicked on. I was about to head back into the office when I caught a glimpse of a guy that just walked into the room directly across from the deck I was standing on. He had obviously come from a Christmas party because he carried a shopping bag that he flung onto the credenza as he walked to the bed. He slipped off his jacket and looked through his phone for a moment.

I was feeling a little guilty about watching him, and was about to look away, when I saw him pull his sweater over his head. Holy hell, this man was beautiful. Even from across the parking lot, I could see that he was extremely well built. He was golden tan and had abs that I wanted to trace with my tongue. He loosened his belt and let his pants fall just as quickly as his sweater. I knew it was wrong to stare, but I couldn’t get my legs to move. I waited for him to close the curtains so I could take my soggy panties back into the office but he didn’t. He tossed his phone onto the table and opened his balcony door. It was a cool night so I knew he wouldn’t be out there long in just his boxers but I wanted to enjoy the show for as long as possible. It’d been over year since I’d had any action that wasn’t battery operated and even I wasn’t interested in fucking myself anymore.

He was staring up at the sky with one elbow braced on the door frame while his other hand brushed up and down his belly a few times before creeping down to his crotch. He squeezed his balls before stroking back up the length of his cock through the outside of his boxers. God, he was hot. I didn’t realize that I was mimicking his actions until I kicked up my foot to the top of the deck railing and let my own hand find my moist center. Just watching him lazily stroke his cock through his cotton boxers was hot enough to make me dripping wet, but when I looked up and saw him staring at me, I shuddered and almost came right then. I froze in horror at being caught, even though my cunt was throbbing harder than it had in years. I waited for him to make a move and when he did, I was shocked.

He lifted his left hand to his right nipple and rolled it around between his fingers. He leaned into his hand a bit and I convulsed in pleasure. I yanked my own sweater over my head and pulled my tits out from the top of my bra. Thank God I was wearing a lacy bra! I lifted one of my full breasts to my mouth and sucked my nipple while the first wave of my orgasm rocked through my body. My knee wanted to buckle but it was too good. He was stroking his cock vigorously and was grabbing his balls when he also started to shake. I gently bit my nipple again while rubbing my clit until my arm muscles were exhausted and let the waves of pleasure over take me. I hadn’t had an orgasm, or orgasms, like that in…ever. I whimpered when it was finally over.

My mystery man seemed equally spent but he didn’t close his curtains and he didn’t go back in. He just stood and stared, watching to see what I would do. I was feeling bold after that so I took my bra fully off and gently kneaded my breasts. I could see his smirk and his dick start to twitch a little. Maybe there would be a round two in my future?

He made a gesture for me to wait for him and then he turned on his heel and went into his room. He stepped into his pants and grabbed his jacket and then disappeared from the room. Panicking, convinced that he had called security and was rounding up some kind of swat team for the perverted to come get me, I quickly gathered up my clothes and turned back into the office. As I was closing the door, I peeked out one last time and saw him walking across the parking lot to my building. Holy shit!