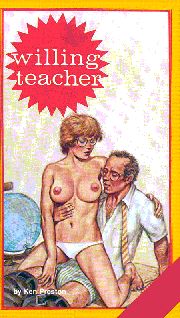 Ann Carter shuffled the sheets of lecture notes together and stuffed them into her sexual hygiene notebook. She stacked her textbooks neatly on the corner of the desk and leaned back in the chair, watching her class copy the homework assignment from the blackboard. She noticed her hands were trembling slightly, and wondered what she should do about Billy Jackson. The boy had a way of staring at her tits that made her nipples stand up embarrassingly stiff.

The bell signaling the end of class sounded. She watched the students filing past her desk. Her stomach did a small flip, seeing how many of the boys had their hands stuffed in their pockets, trying to hide their erections. The color slides of female anatomy had made more than half the boys cross their legs and cover their crotches.

The sight of naked pussy is stimulating, even in a classroom atmosphere, she thought to herself. Tomorrow, when she showed the pictures she had taken of boys with big hard-ons, it would be the girls' turn to get flustered.

A dumpy, tousle-haired teacher stuck her head in Ann's doorway. "Mr. Swift wants to see you in his office, right away," she announced. Her grin seemed to say "now you're in for it". The bitch had been the loudest voice opposing the new experimental sex instruction class that the school board had finally, though reluctantly, decided to try.

Ann wondered why the principal wanted to talk to her. She nervously patted the long braids of golden hair pinned in a neat bun above the smooth ivory column of her neck and settled her full tits in her lacy bra. Her nipples still stood out, hard and brittle feeling.

The Jackson boy had a way of undressing Ann with his eyes that made her pussy itch and her mind wander from her lecturing.

"I was told you wanted to see me, Mr. Swift," she said to the handsome young principal, after his booming "Come in!" had brought her to his inner office.

"Oh, yes, Miss Carter. Please, sit down. How are things going with the new class?"

Ann gave him a quick progress report, crossing her knees and showing him a lot of shapely leg. It was difficult for her to keep her eyes from straying to the bulge in his slacks. In her mind, she was tugging his zipper down and pulling out a thick, sturdy cock. She'd had a bad case of the hots for the wavy-haired principal ever since the first day she'd met him.

He listened attentively, nodding and making a few notes. He paced behind his desk, chewing on the end of his pencil, and finally got around to why he'd asked her in.

"I've been requested by the Board to ask you about the source of the color slides of… of… naked males and females… ah… that you use in your lectures."

"I take them myself, Mr. Swift," she replied quietly. "You know how scarce proper sex instruction material proved to be when we put this course together. It's now fairly complete, material wise. I still need slides of an adult male and female having intercourse."