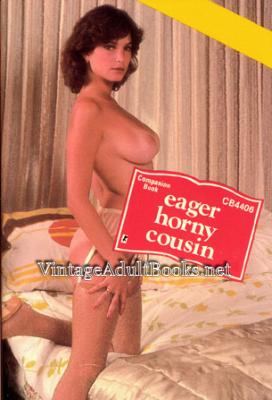 Susie Blake had big tits, and she knew it. She cupped them in her hands, hefting them out for Mark's inspection as he stood gaping before her, frankly astonished.

"Well?" she asked sweetly, enjoying his stare. "I told you they were bigger than Pam's, didn't I? Is this proof enough?"

Slowly Mark Harmon's head bobbed up and down, his face slack with amazement. "Jesus, are they ever! I never saw any like those before, even in pictures! Can… can I touch them?"

The question came out shy and breathless, making Susie smile at the tortured look on her cousin's face. Though excited by the prospect of having her oversized titties touched, she pretended to hesitate. "Well… I don't know. Are you sure Uncle Dave and Aunt Linda won't come back from town early? If they got home and started wondering why we didn't have the morning eggs collected yet…"

She glanced fearfully at the open chicken coop door, almost expecting to see Uncle Dave's big station wagon coming up the gravel driveway beside the house. She'd arrived almost a week ago to spend her entire summer vacation with them, and the last thing she wanted now was to get caught like this.

Mark's handsome face scrunched in a wince, and he spoke hastily. "Nah, they never come back early from their town trips. And even if they do, they won't bother coming out here to look for us. Look, I'll make sure no one can see anything."

With those words he quickly set down his egg basket and bolted for the wood-slatted door, pulling it shut with a bang and hooking its crude, handmade latch to give them privacy.

Actually, the chicken coop wasn't the most private place in the world even with its door shut. Little more than a makeshift shack, its boarded walls gaped to let the country morning sunshine stream in, more than enough to let someone peek in if they wanted to. And the subdued lazy cackles of the chickens as they perched in their roosts or waddled along the hay-strewn wood floor poking for food reminded Susie of an audience, all intently looking on as she stood with her shirt bunched at her shoulders and her tits jutting out.

For a moment she was almost sorry she'd set out to show Mark that her tits were bigger than his sister's. If he hadn't pointed out Old Bess, the family cow, as they were heading for the coop and made a snide remark about Pam's tits, it never would have gotten started. On the other hand, she was the one who'd pushed the subject by announcing that her tits were every bit as big as his sister's and maybe even bigger. One thing had led to another, and now she found herself standing in a chicken coop with her tits sticking out just like that cow's, all because she wanted to impress her cousin.

At least she'd accomplished that much. Mark was impressed. Glancing furtively toward the house where he hoped Pam was still sleeping, he fixed the door shut and came back.