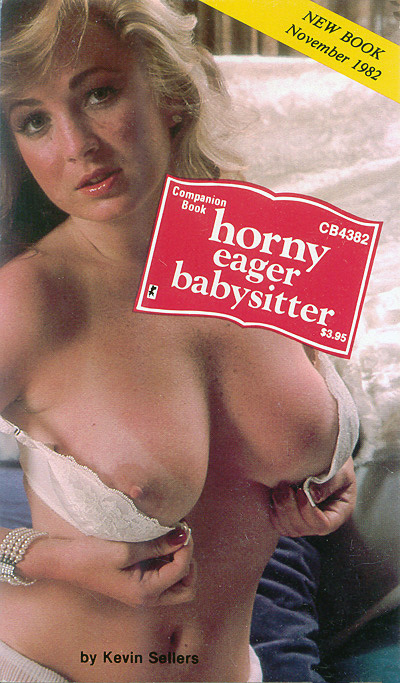 "Ahhhh, that's it, honey," Al Burke moaned, leaning back on the couch and sighing happily. "Rub it nice and slow like that. Yeah."

"I… I don't think we should be doing this, Mr. Burke." Janie Sanders' voice was a shy tremor as she stroked his bulging crotch delicately. Her fingers groped along the stiffness there, exploring with a mixture of hesitation and curiosity. She squirmed uncomfortably, listening for the sound of Mrs. Burke's car pulling into the driveway and vaguely aware of the moistening sensation in the crotch of her panties. "I mean, your wife could come home any minute, and I'm supposed to be watching Tommy."

"What's there to watch?" Al countered with a throaty chuckle, fully aware of the girl's willingness, and determined to overcome her fears. "Tom's asleep, and there's no way Marsha's going to sneak up on us while she's driving that old clunker of mine. Besides, her bridge parties always drag past midnight. We've got a whole hour to ourselves, so let's just relax and enjoy it. Here, maybe this'll help."

He slid an arm around her shoulders, drawing her to him.

Janie didn't resist. Actually, she knew he had a point. There was no danger of getting caught, with little Tommy Burke asleep, in his room and. Mrs. Burke gone. But she couldn't help feeling a small twinge of fright. She'd never seen a man's cock all hard and throbbing before, let alone held one in her hand. His prick pulsed rhythmically, shooting electric jolts right to the growing itch in her cunt.

Al gave a deep groan, thoroughly enjoying the teenager's massaging hand. "Oh yeah, that's nice. You know, you're the best babysitter Marsha's ever hired. Looking out for Tommy the way you've been doing the past couple of months, taking care of the place while I'm at business meetings and Marsha's off with her clubs and organizations. Yeah, you're quite a find, all right. Now rub a little faster."

As he spoke, the big, meaty hand draped over Janie's shoulders slipped sound and fell casually across one of her large blouse-covered tits.

She gasped, instinctively clenching her fist on his crotch as a thrill of new excitement rushed through her. "Mr. Burke, please. I shouldn't. It isn't right. I ought to be getting home, and just because you said it would feel good, that doesn't mean I want to… oooh!"

Her voice broke breathlessly as he began to squeeze and knead her oversized tit, making her nipple expand and stiffen in response.

Even under the layers of fabric, Al could feel that promising pebbly stiffness. His hand squeezed more confidently. "And what's wrong with feeling good, babe? After all, you've been doing such a tine job for me that the least I can do is repay the favor. There's nothing wrong in that, is there?"