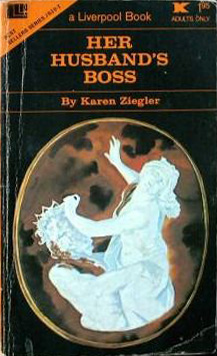 Maxwell Alexander eased back in his plush desk chair and swung around toward the massive grey-tinted window behind him. Only two weeks ago, he had been able to gaze down unblinkingly through the golden May sunlight to the traffic-clogged Los Angeles intersection five stories below, but summer had come scorching in on the heels of spring and now the air shimmered with heat and a hazy blinding glare. The sky seemed to drop down suddenly thick with smog, like a stifling shroud over the sprawling city. The newspapers had been reporting that the level of air pollution was critical and had already reached the danger point twice during the past week. As usual, the papers had blamed it on the complexes of heavy industry that surrounded the city and editorial writers were crying out for more stringent anti-pollution measures.

With an impatient snort, Max turned his chair back around toward his broad mahogany desk and picked up the latest copy of New World Steel, Alexander Steel Company's bi-weekly magazine. He grinned perniciously at the striking cover photograph that met his gaze – a shapely, long-legged blonde sunbathing next to a sparkling bright blue river with a few gleaming white smoke-stacks rising over the trees in the background, gently puffing out pale balls of smoke into the unsullied sky. The caption read: "Pollution – What's All the Fuss About?" Even though the picture had been taken months ago, it still amused him to think of how he had been keen enough to take advantage of a steelworkers' strike to scrub down those smoke-stacks and then burn tons of newsprint in the huge furnaces to produce that innocent-looking white smoke.

The "clear blue stream" had been a bit more of a problem, considering the sulfurous waste that was being constantly dumped into the river by the steel mill, but, just as the photographer had said, "There's nothing you can't do with the right camera filters, and good equipment." Sure, it had been expensive and time-consuming, but hell, he thought smugly, it was well worth it. It was exactly this kind of clever, creative thinking that kept him in his position as president, and major stockholder, of Alexander Steel, the booming company that his Uncle Morton Alexander had founded.

Yes, he mused proudly as he chewed off the end of one of his expensive Havana cigars, he deserved every damned thing he had ever got. After all, it had taken him years to reach his present position, and by God, he had had to scheme and connive, in ways that few people could really appreciate, to gain control of this industrial empire. In a rare moment of humility, he found himself thanking the Gods of fate that he had become so thoroughly successful, had become a man who was wealthy and powerful enough to avoid the unpleasantness of the smoggy Los Angeles summer by remaining safely ensconced in the comfort of his lavishly-decorated, air-conditioned office.

Puffing reflectively on the lighted cigar, he flipped through the glossy magazine to the pages that outlined Alexander Steel's profits for the last fiscal quarter. Though he knew every figure by heart, he could not help but let out a low, satisfied chuckle at the sight of the marked increases in orders and profits that would make him and the other stockholders many millions of dollars richer this year. In the ten years that Max had worked under his aging uncle, Morton Alexander, he had learned the business well, so well that the old man had had almost no choice but to promote his enterprising nephew up to a vice-presidency, the position of power from which Max had gradually taken complete control of the company. That had been almost five years ago, Max recalled nostalgically, and the promotion had been Uncle Morton's single grave mistake in an otherwise brilliant business career.

Max never tired of remembering the details of his relentless climb to power and wealth. Because of his nephew's extraordinary business sense, the usually shrewd old uncle had tended to ignore Max's occasional unscrupulousness and the new vice-president's obvious impatience with ideas that ran contrary to his own. Max had a tendency to interpret everything around him in terms of dollars and cents in his own pocket, which after all, the old man thought, might be a good thing from a stockholder's standpoint. At first, the younger man's trenchant greediness about business matters had disturbed Uncle Morton a little, and the aging steel magnate would be tense and shrill after a few hours around him. But gradually, Morton Alexander learned to relax around his eager nephew and had come to regard the young man's impatience and demands as nothing more than healthy ambition.

Cautiously, and then with less care, the uncle had started to accept Max's advice on crucial new issues concerning important company policies and had eventually entrusted him with the handling of entire projects without feeling the necessity to oversee them or examine the end results of his power-hungry nephew's administrative efforts. Ultimately, with a great surge of confidence that Max would be able to work even more effectively with additional responsibility, the old chief executive had brushed aside the violent protests of the other board members and had seen to it that his ambitious junior relative was elevated to a full vice-presidency.

That had been the beginning of the end for Uncle Morton. He had sown the seeds of his own downfall as the reigning head of Alexander Steel Company.

It had been only a matter of time until, little by little, Max had thoroughly usurped his uncle's power and had phased the older man out of the company altogether with only a comfortable token pension and a relatively insignificant vote as a minor stockholder. The other executives who had been troublemakers in Max's eyes – the ones who had been foolish enough to show any opposition to his ruthless rose to the presidency and full command of the company – had been forced into either complete administrative slavery or dishonorable resignation with a bare minimum of compensation for their years of service with Alexander Steel. One by one, the vacant posts had been filled with fresh personnel that the new dictator had screened personally – a staff of people who filled all the necessary qualifications and were willing to accept low starting salaries with promises of handsome incomes in the future if they somehow managed to meet his high expectations of them in their various fields. No one had been able to stop Max from having his way as the president of the big corporation, and he knew that there was not a single employee who could justifiably criticize his effectiveness as a businessman – if one of them should even dare to think of criticizing him. As merciless and underhanded as he often was with other rival companies, and sometimes with his own customers, he had built Alexander Steel's quarterly profits up to all-time record highs. And even more impressive at least as far as the employees were concerned, he had introduced incentive programs through which everyone, from an ordinary laborer to a vice-president, could earn attractive bonuses if they were able to fulfill the production and sales quotas that he had posted on bulletin boards as being "Normal Standards", but which veterans of the industry considered beyond the capabilities of the huge plant as well as beyond the range of the available market. Nevertheless, sales and production continued to soar and, occasionally, much to the surprise of the company skeptics, Max's secretaries posted bonus lists throughout the plant.

In short, Max Alexander was an undeniable success in the world of business and, moreover, he enjoyed his position far too much to feel the smallest pang of remorse for anything he had had to do to become what he was. To the contrary, he often found himself almost wishing that he had not gained the pinnacle of his career quite so rapidly and completely… that there was still some challenge left in his life. Ironically, Max's knack for organization had made the company operate so efficiently that there was little for him to do now but count up the profits and amuse himself with an occasional new project – such as New World Steel, the company magazine that now lay before him on the desk.