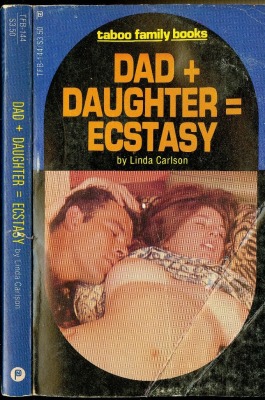 Buffy shook with fear of being caught listening at the door, but her curiosity held her to the spot. Mom and Dad were going at it hot and heavy again.

"I spend twelve fucking hours a day in that office!" she heard her father yell. "Just how often do you think I'd get a chance to fuck around?"

"Keep your voice down, Ed," her mother said. "You'll wake the kid. Or the neighbors."

"Fuck the neighbors!" her father yelled again. A slamming sound told her he must have gone into the bathroom. Her parents had their own. Buffy used the one in the hall.

The twelve-year-old pulled her bathrobe more tightly around her small body. The hallway was chilly and the girl had forgotten to put on her slippers. She brushed her red hair away from her face and tried to peek through the tiny crack where they'd forgotten to shut the door all the way. She saw her mother turning down the twin beds, a sad expression on her face in the light from the table lamp.

Her father came out of the bathroom and Buffy's eyes grew large. He was dressed in underwear. Just shorts and nothing lese! Buffy had never seen him like this. She'd seen him in bathing suits, when they went to the beach, but this was something else, more private, somehow. Despite the fact that she was peeking and she knew it was wrong, the sight of her father made her heart beat a little faster.

He crossed the bedroom and picked up a glass on the dresser. It was almost full. Whiskey, Buffy knew. Daddy drank a lot of it lately. He put the glass to his lips and drained half the contents. Then he turned and glared at his wife accusingly.

"Furthermore, I haven't had a piece of tail in two weeks, which you'd know is true if you weren't such a cold bitch!"

Her mother walked over to where he stood and clenched her fists.

"I've heard enough! Do you hear, you cheap, drunken, whoring son of a bitch?"