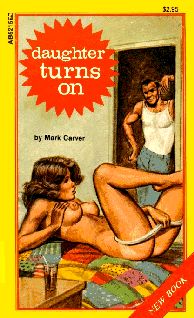 The biggest problem Phil Jenkins faced in running the Del Mar Theater in the small coastal town of Pacific Gardens, population 16,523, was not the attendance. In spite of the local drive-in, the only movie house in town did a packed business every night.

Phil's problem was not outraged parents, either. The Del Mar showed only wholesome family entertainment, and tonight featured a Clint Eastwood Western and a Walt Disney frolic, which always packed them in.

The real problem Phil Jenkins faced at the age of forty-two was hot, innocent and eager young pussy. Like the gum-chewing angel now facing him across his desk in his private office in the Del Mar.

"I know there aren't any openings for usherettes right now, Mr. Jenkins," Sally sighed, her tits surprisingly ripe for her age. "What I mean is, I wanna be put on the waiting list. Ginny is gonna be married next month, right? And you're gonna need someone to take her place, right?"

Phil swallowed hard and nodded, his huge cock straining fiercely at his pants. It would take a saint to resist getting the biggest hard-on of his life while gazing at Sally's small wet mouth, which she licked repeatedly. Although the little blonde had the face of an angel and the body of a sex-Goddess in the making – give her two more years and boys would shoot off in their pants just gaping at her – Sally's reputation, even for a hick town like Pacific Gardens, was notorious.

If it was hell to be called the town nympho at her tender age, Sally was totally unaware of it. She was, in fact, proud of her wild reputation. Her mother was a divorcee, who also fucked like a mad dog in heat, rumor had it. Her mother didn't give a damn what Sally did with her cute ass as long as she got passing grades in school.

The trouble with living in a small town was that everyone knew everyone else's business, if not today, then tomorrow for certain. Phil Jenkins was acutely aware of this as he faced the hot-titted little blonde in his office this night, at a little after nine p.m.

If Phil succumbed to temptation and rammed his massive prick up Sally's juicy little cunt, it would be flashed around town before the sun's rays met the shimmering Pacific on the edge of town tomorrow morning.