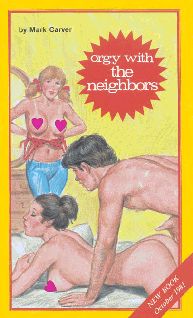 She said she was eighteen years old, but from the way her lush, tanned tits heaved softly in her bikini, she looked at least twenty. A knockout, Jack Parks thought. He felt his prick pound in his pants.

"My wife just went shopping," Jack told her. "All we've got is instant coffee. Okay?"

"Far out," April murmured. She followed him into the kitchen, her juicy ass bouncing. Her mother's instructions had been very clear.

"Just give him a hot sample, April," her mother said. "Don't make a marathon out of it! Make him feel welcome, but don't overdo it. Got it, angel-pussy?"

April lived with her mother, who was divorced. The people next door had just moved into the house a few days ago.

"In other words, don't hog it all to myself," April grinned at bet mother.

"You do," her mother said softly, "and I'll spank your cute ass until you can barbecue steak on it!"

Jack Parks made two cups of instant coffee in his kitchen and handed April one. It was Saturday morning, and his wife had just gone grocery shopping with the kids. Jack had a teenaged daughter who, while she was blossoming into soft, ripe curves, couldn't begin to compare with the tawny blonde in her red bikini.