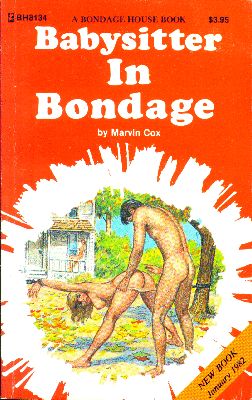 Debby Wilson touched the delicate fringe of blonde hair that surrounded her pink, oozing cunt. Her emerald-green eyes flashed with growing pleasure. Slowly, she lifted her hips until Jimmy's balls touched the insides of her thighs.

"You gonna fuck me, or just look at me all night?" Debby teased, looking into her boyfriend's eyes.

Debby shivered with ecstasy. This was their third time to fuck, and if this fuck was going to be anything like their last fuck, they were both in for a treat. The memory of his giant cock still burned in her mind. She reached out and touched his bobbing prick, letting her fingernails gently scrape over the loose sheath of foreskin.

"No, let's make this one slow, OK?" Jimmy said, swallowing hard. "Hell, I haven't fucked you in almost a week."

Debby had missed him, too, but there was nothing she could do about it. She had had five straight babysitting jobs and she desperately needed the money for college. And September was just two months away. She still needed almost three hundred dollars. After she got into college, however, there would be plenty of time to spend with Jimmy. They had even talked of getting an apartment together just off campus. It would be perfect, coming home from classes and then taking care of the house for him. And then when he came home from work. That part would be fantastic.

Debby removed her hands from his thick, pulsating cock and let her fingers trail up his hairy, muscular chest, finally resting on his wide shoulders.

"Fuck me, Jimmy," she whispered, her eyes glazed with anticipation of what was to come.

"Let me lick you for a little first," Jimmy said, resisting her effort to pull him down on her body.