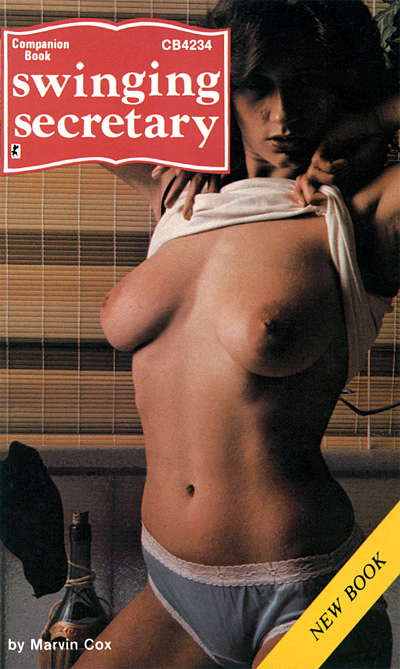 Sara let her fingers slide down the man's face to his shoulders, touching the firm-muscled flesh. Slowly she closed her eyes and moaned, her expression one of tortured anguish.

"Lick my pussy!" she whispered. "Oh God, chew it up and swallow it!"

The man spread the loose folds of skin that surrounded her tiny opening and leaned forward, sniffing the steamy aroma of her oozing canal. As her throbbing clit came into view, he touched it with the tip of his tongue, making Sara flinch with increasing desire. She tried to hump forward, to swallow his tongue into her pussy, but he held her back.

"Not so fast, baby," he whispered, his tongue still on her clit as he looked upward through her silky bush of peach-colored cunt hair. He could see her face framed by the two melon-like tits that jutted upward, and saw the agony in her expression. "I… I want to make it good for both of us."

Sara bit her lower lip, feeling the ache in her cunt become unbearable. Already her cunt canal was, convulsing, squeezing out a thick stream of juice, wetting the insides of her thighs. Small droplets clung to her pussy hair, glistening in the light like opaque diamonds.

The man gave her one last look, his gaze taking in her flaming red hair, her emerald green eyes behind soot-black lashes, the soft contours of her curved, body, her luscious coral-tipped tits, her wasp-like waist, her long, milky-white legs.

Then he stabbed forward with his tongue.

"Ahhhhhh," he whispered, his breath hot and moist as he locked his lips around her churning cunt.

Sara felt an immediate spasm of pleasure sear into her cunt when his tongue was thrust in. It was almost like having a cock inside her, but marvelously different. Instead of being hard and rough, it was slippery and soft like a writhing snake. Another ripple of ecstasy constricted her cunt when he curled it, gliding the tip of it over the top of her pussy. Her cunt lips closed and opened in a sucking manner, trying to pull more of him inside.