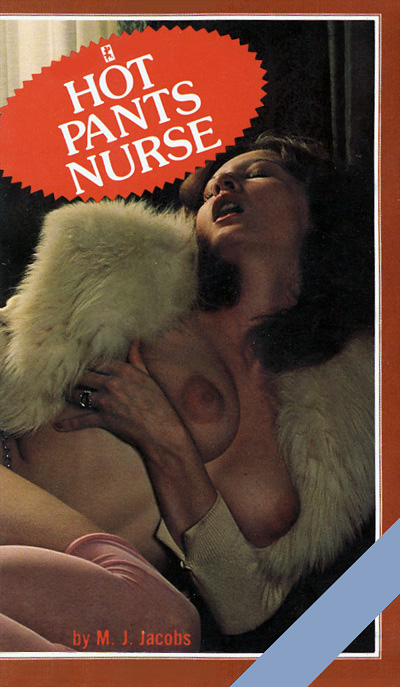 Janice Roberts knew what was coming. She felt a shudder of disgust rush through her when she saw Dr. Clark sauntering down the hall toward her. He walked with the cocky air of a man who thought he could have anything he wanted, and Janice knew that he wanted her.

Her womanly instincts were as easily aroused as any other thirty-three-year-old woman's. It was just that she had dedicated herself so completely to her nursing profession that there really wasn't any time in her life for men. She spent as much time at Harper General Hospital as she possibly could, long hours of hard work that most of her colleagues would have, shunned. She spent her spare time reading the latest medical journals and keeping abreast of new advances in the profession. She was the most knowledgeable nurse at Harper General, and the most frustrated.

Janice had been frustrated for most of her life, the result of the endless moralizing of her old-fashioned and restrictive parents. Her parents had built a wall around her, a wall that was supposed to protect her from the wickedness of the modem world. Ever since high school, she had been drilled in the wicked ways of men, the ways they had of making young girls compromise their morals. Janice hated to admit it even now, but she had always wanted her morals to be compromised.

Janice realized that her parents had recognized her natural desire to be loose. Faced with such tendencies, they had increased their efforts to isolate her from the world. They had fought against her desire to become a nurse, preferring that she spend the rest of her days in a convent. Only with the greatest of difficulty had she persuaded her parents to let her devote her life to nursing. Her choice of a profession had been accepted, as long as her dedication to it was to be complete.

Janice's parents had died two years earlier in an automobile accident, but the shadow they had cast over her still remained, although she thought she was beginning to see the glimmer of light from time to time. Janice knew that there was nothing now to keep her from living her life the way she wanted to live it, but casting off the shackles of her parents' ridiculous morality wasn't as easy as it seemed.

She wanted to look up and smile at Dr. Clark as he walked down the hall toward her. She wanted to let the sparkle in his blue eyes make her feel warm inside, but something kept her from letting go. She knew that he was interested in her, knew that he would jump at the chance to take her out. But what would she do if she let herself succumb to her desire for masculine warmth. Would he use her cruelly? Would he hurt her in the process of taking her virginity? These were questions she knew she should have asked herself years before, questions, however, that she would never have dared ask until now.

Janice wanted desperately to experience all the things she could have experienced years before, but she was afraid that it was too late. Her image of herself was far from attractive. She couldn't believe that any man could find her attractive. And yet, Dr. Clark wasn't the first man who had flirted with her. She was beginning to open up to the possibility that she really did have what it took to catch and hold a man's attention. She had no idea what she would do with his attention once she had caught it.

Janice had looked down at the floor as soon as she had seen the glimmer in his eye. She tried to return the smile he was flashing at her, but instead raised her head and stared defiantly ahead of her, clutching Mr. Dexter's file tightly and pretending not to have seen him.

Janice felt a shiver of fear pass through her when, instead of passing her by, Dr. Clark stopped and grasped her arm. His touch sent a shock through her body. She thought she would faint on the spot.