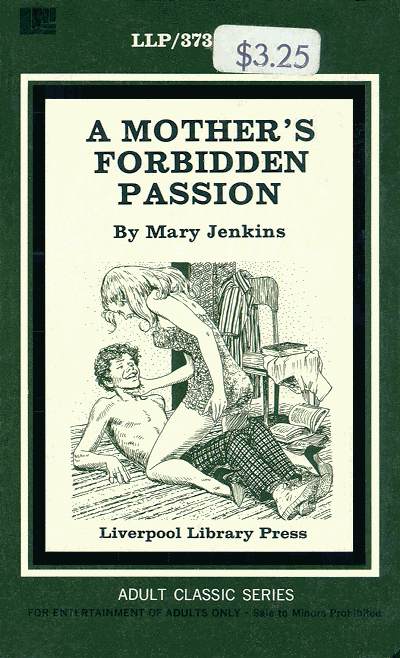 Leaning forward on the rear seat of the taxicab, the tall statuesque blonde woman kneaded her handbag with nervous fingers and stared out at the familiar and yet strange streets and buildings of Westridge – a town in which she had been born thirty – six years before, and which she had not seen in five years.

Her name was Bette Clark, and she was a beautiful poised woman with the ripe figure of a young girl: her breasts high and proud and perfectly rounded, showed no sign of sagging, and her thighs, visible where the hem of her short, ice-blue dress hiked up, were firm and tanned, tapering into dimpled knees and slender ankles. Her hips, small and boyish and yet curved provocatively, moved involuntarily on the seat in her agitated state, and she kept moistening full, naturally pink lips with the tip of her small, wet tongue. Her face was soft and lovely, free of age lines, and yet it contained a certain gaunt quality, a haunted quality that was mirrored by her large, expressive blue eyes; once filled with laughter and gaiety, those eyes now contained a hidden pain and torment that was deeply rooted.

As the taxi sped through the downtown streets of Westridge, Bette wondered again – as she had done for perhaps the hundredth time in the past week – if she wasn't making another mistake, an even bigger mistake than the one she had made five years ago, in coming home again. Maybe it would have been better if she had remained in Chicago, if she had simply abandoned all hope for a return to normalcy and spent the rest of her life living alone with her guilt and her shame. But that was not the answer, she knew that – any more than suicide, of which she had thought on more than one occasion, was an answer. No, she owed it to Tony and to the memory of David, as well as to herself, to try to make amends for what she had done, for her weakness.

Bette's mind wandered back those five years as it had during so many waking hours recently, to the night she first met suave, sophisticated Hale Bixby. She had been at a party alone – David had been out of town on one of his business trips – and she had been drinking champagne, a beverage which invariably put her in a gay, light mood. She had felt like dancing, and Hale Bixby had been there, a smile on his handsome face, saying the right words and making the right gestures, and she had been drawn to him. At first the attraction was no more than one of immediate fun – dancing, laughing and mild flirting. But then as the evening progressed and she spent more and more time dancing in Bixby's arms, felt his warm, hard male body close to hers, the attraction had subtly changed into a physical craving. It wasn't that she had been love-starved – David was a competent if unexciting and unimaginative bed-partner, and even though he was away three and four days a week on his sales route, he was always hungry for her body when they were together. She couldn't really, even now, explain what had been the cause of her growing desire for Hale Bixby: the champagne, the magic atmosphere of a warm summer night and a party, the charm and handsomeness of Bixby himself, were all a part of it, she supposed. And yet, it was more than that. It was as if she had been slowly changing, becoming something other than a faithful wife and a good mother to their thirteen year old son Tony; it was as if there had always been a wild streak in her, a lusting for excitement and adventure, repressed over the years but now breaking through.

When Bixby casually suggested Bette go for a ride in his convertible out by the lake north of town, her heart had pounded wildly in her breast, and even though she knew it was wrong, she had said a breathless yes to his proposal. She didn't want to go, and yet she did, desperately. They slipped away from the party – discreetly, Bette had thought at the time in her light-headed state – and drove in Hale's brand new Dodge through the warm night. They stopped on a promontory overlooking the lake, a lonely and deserted spot, and the moon had been big and gold in the sky, and the crickets had sung, and when Hale pulled her into his arms, she had no will to resist.

His lips and tongue had sent passion spiraling in demanding waves through her body, causing her nipples to swell into rigid arousal, her vagina to secrete droplets of her building excitement, and her arms had clung to him as if she never wanted to let him go. Then he was drawing her down on the seat, his hands caressing her breasts, her thighs, further intensifying her arousal, and she had known with a dim part of her mind that there could be no denying Hale Bixby – that she wanted him as much as he wanted her.

They tore at one another's clothes, and then they were naked, moaning and writhing on the seat of the car, and his penis was in her hand, a huge throbbing shaft, much bigger than David's, filling her with wild delight at its touch, and the prospect of it buried deep up inside her hungrily needing belly. Bixby had kissed her breasts, nuzzling each nipple, and his right middle finger had teased her clitoris then slid lower and into the hot wet cavern of her womanhood. Bette had been half out of her mind with desire as she fondled his thick hard cock, cupped and caressed his sperm-filled testicles, and finally she had drawn him on top of her, holding tightly to his cock, guiding the palpitating shaft to the thin beardedly aching mouth of love between her trembling thighs.

Then he was sliding into her, filling her, the head of his burgeoning penis slamming hard off her cervix, and she went wild with the sensations coursing through her flesh. The only man she had ever had was David; she had been a virgin when they were married at the age of eighteen, and while she enjoyed sex with her husband, it had become a commonplace occurrence – same position, same foreplay, same and well-known penis filling her vagina. And now she had a lover, another man inside her, a real man with a monstrous strange to her, cock that drove into her in dizzying strokes that filled the very core of her with ecstasy. Never had it been this good, never, never! Bette locked her thighs to Bixby's sweating mid-section, began to pound her heels on his driving buttocks as her orgasm spiraled higher and higher as she moaned out her delight and urged him on to greater strokes into the hot moist cavern that was her clasping, secreting cunt.

And then she was there.