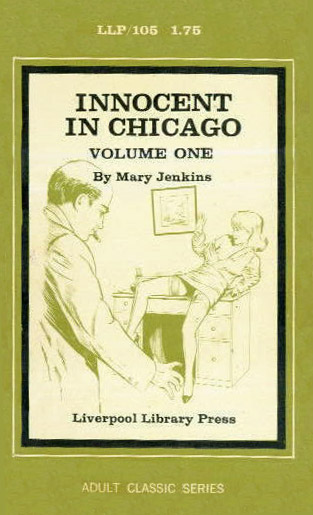 Innocent in Chicago Volume One

Innocent in Chicago Volume One

When a child of eleven, Cynthia Gordon was perfectly content to live on the farm in Iowa where she had been born and raised. Her father, a burly, blond, third generation American of Scandinavian descent, grew mostly corn and pigs, but Johnny, her fifteen year old brother, who wanted to stay on the land, was interested in raising cattle. He already had a young milk cow which he had raised from a calf and was thinking of breeding her with a neighbor's bull.

One morning early that autumn, as the pumpkins were glowing yellow and plump on the vines, and her mother's kitchen was permeated with the heady smell of spices and pickling, and the fresh tart odor of baked apple pies was floating through the window to where she was sitting on the back porch with Pal, their thick coated German Shepherd dog, she heard her father and Johnny talking in the kitchen about his cow.

"Jersey seems to be in heat now, Johnny," her father said. "If you still want to breed her, now's the time to do it. I've talked with Chris about it and he says to bring her over anytime. He's got a fine bull and it should be a dandy calf."

"Tomorrow's okay with Chris. But remember, the entire responsibility of bringing this calf up is yours. No saying you're tired of taking care of it and Jersey after it's here."

"Gosh, Dad, you know I won't do that. I'm all set to grow her up and win me a couple of prizes at the fair."

"Okay, boy, we'll go over tomorrow after lunch, then."

Cynthia slipped off the porch so her parents wouldn't know she had heard and walked down to the barn to look at Jersey. She had noticed that previously she had not only been kept away from the pens and barns at breeding times, but that any discussion concerning them between her parents, or between her father and other farmers, had always ceased when she approached. Thus, the only things she associated with the word "breading" were the sound of the bull's bellowing cries echoing over the green hills and a feeling that it must be something "not nice".

But lately she had been disturbed by vague warm sensations in her own body, centered deep in her belly, which had made her restless and irritable, and she had begun to speculate about her own sex organs as well as those of animals. She resolved she would sneak over to Chris' farm tomorrow and see what happened that was so forbidden.

The next day was a golden autumn day with the smell of an early winter in the air. From a deep blue sky the sun turned the leaves to a shimmering fire of reds and golds. Along the road the sumac was glowing purples and deep reds, and by the farmhouse the late blooming flowers were showing their last blossoms.