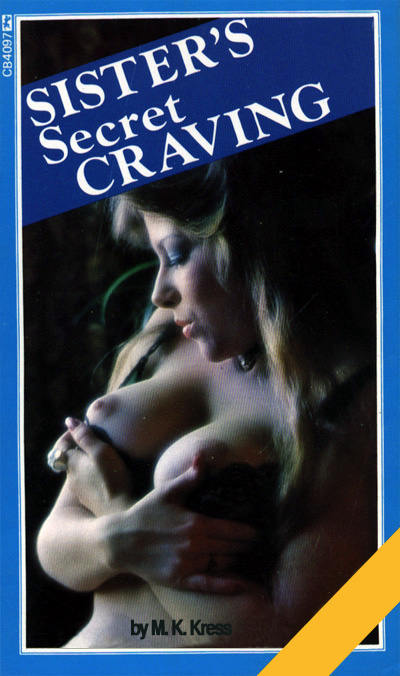 Cindy Whitehall, sighed. She was tired and the day had been a mess. Nothing at the studio went right. She shook some of her long, blonde hair from her oval face and smiled as she put the key in the front door lock. It was good to be home. Her twenty-four-year-old body was relaxing already. She'd have a stiff drink and then hit the sack. God, but she felt horny for some reason. Probably from watching all the models in her studio dressing rooms changing clothes all day long. Their naked, slim bodies, usually tanned and brown, always met with her approval. Her own figure was too full to be a successful model. Her hips flared too wide, and her breasts were too large. She smiled at the thought. She'd never had any complaints from any of the lovers she'd had.

She opened the ornate door to her large home and threw her coat on the nearby chair. She flicked on the living room light and gasped. There before her eyes was her eighteen-year-old brother Jimmy, naked and in the arms of the upstairs maid, Juanita Gonzales.

Jimmy jerked his blond head, bringing his lips from the Mexican girl's tits. "Sis! You weren't supposed to be home until after midnight!" he managed to get out.

Cindy merely stood there as Juanita scrambled for her bra and blouse. She was only nude from the waist up. She had hoped to make it with the younger Whitehall and assure herself a long job, and one where she wouldn't have to work so hard. She didn't particularly like sex, but it had made life easier on all the other jobs she had held.

"I think you'd better go home, Juanita," Cindy said in a cold voice. "And don't bother to come back." She didn't want a maid that was a slut in her house. She'd had warnings about Juanita from other neighbors, but she'd dismissed them, since she hadn't thought her younger brother was capable of being interested in girls.

She cringed when she thought about the promise she'd made their mother when she'd died three years ago. She'd told her that she would take care of Jimmy, even though she was not sure what her brother was like. And the three years had whizzed by. She had finally broken into the dress designing world, and was making headlines in the industry with her vivid and yet simple patterns. She had wanted to make sure Jimmy was well cared for, and she had provided the house with maids. She wasn't about to do the housework herself. She had more important things to do.

She stared at the naked form of her brother, still sitting on the couch with his cock jutting out from his loins like a rocket ready to take off. The sight of him messing around with that slut, fondling and sucking the Mexican girl's breasts, had made her angry. He was too good for the likes of her, and she had to do something to make sure he never did it again. She stood there, still not moving as Juanita finally got all her clothing on and rushed out of the door.

Cindy wondered why Jimmy made no move to cover his nakedness, or hide the jutting pole of flesh rubbing against his lean, tail belly. She realized with a stab of insight that she didn't know her younger brother well at all. He was almost a stranger to her. She had been so busy trying to make it in the industry, that she had not given her attention to her brother.

She noted with a half-smile that her younger brother's cock was man-sized. It was thick and hard, and he obviously was still very excited about what had been happening to him before she had opened the door.