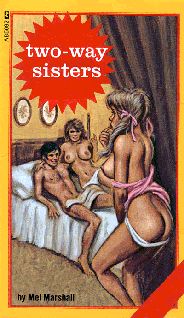 Dianne Richards slumped into the kitchen chair, finally letting herself relax. She felt deliciously tired. Outside it was hot in the August sun, and she had counted on the cool air inside the old house to help her wake up a little. Instead, it made her feel sleepy and a little lazy. But she liked the coolness of the air passing over her hot skin.

She closed her eyes and let herself drift. She had been feeling a driving sexual need all day. It began in the morning a little while after her husband Dave left for work. She had tried to ignore the urgings that came from her cunt, but the more she tried to ignore them, the stronger they got. She surrendered herself to them.

She imagined Dave's big hands playing over her. Just like the other night. It felt so good. He would begin touching her neck, just lightly, knowing that the touch of his fingertips drove her crazy. She remembered how she moaned then.

Abruptly, his hands were replaced on her neck by his lips, and his hands cupped her ample breasts. Her attention focused there, as the tender flesh was molded and squeezed. Her breasts, already large, always seemed to grow larger with each play, seeming to stretch outwards. She liked the feeling. Her whole body was more sensitive when she was turned on, but the change happened first and fastest with her titties.

His fingers found the stiff, taut nubbins of her nipples. Dianne was not one of those women whose nipples hid from view. Even when not aroused, they strained at the fabric of the flimsy blouses she liked to wear. When first mated, she had tended to dress a bit more conservatively than before, thinking that Dave might be angry at the lustful glances she always got in public. She was surprised to discover that, far from being angry, he actually encouraged her to dress more and more provocatively.

"Hell, let 'em look!" he had said. "If anybody wants to look at my wife, that's fine. I take it as a compliment, and so should you." Dave admitted that he got a thrill out of the sexual attention she got. He encouraged her to dress as well as possible in as little as possible, and early on in their relationship they had made an agreement not to interfere with each other in sexual matters. Which was probably why their sex together was still so fantastic, even after ten years together.

Her body shivered when his fingers began kneading her nipples. He was less cautious now, and she tensed at the almost painful stimulation.

"Oh, I love that!" she whispered huskily. "Please – suck my titties now, please! Suck them hard!"

"Sure, honey, anything you say." His voice was a little uneven from his eagerness. "You know how much I like to. Let's get you out of this blouse."