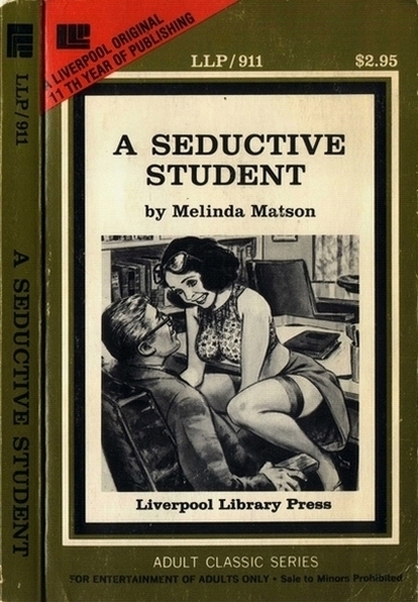 Joselyn Foche lay on her back on the rumpled double bed, the afternoon sun streaming through the floor-to-ceiling windows, baking the soft, round rings of her nipples into hard pink stubs, scorching her bare crotch. She opened her legs wider, letting the sunlight bathe her fat pubic mound, the sparse tendrils of her blonde pubic hair, the plump cheeks of her shapely buttocks.

She was a second year graduate student in Chemistry, but the only Chemistry on her mind at the moment was her own. She felt sensuous, like a cat, and there was a lustful craving between her legs, a yearning deep in her belly. She stretched out, placing her arms up over her head, spread eagling herself, making her firm, pear-shaped breasts lift tantalizingly, parting her thighs so far that it felt almost as if her pelvis would crack from the strain.

Like a human sacrifice she thought, closing her eyes, basking in the heat, letting her imagination run wild. An Aztec victim about to be put to the stone dagger. Her long blonde hair cascaded over the edge of the stone altar, her wrists and ankles manacled to its four corners, the altar, itself, atop a steep sided pyramid. She imagined she was a high-born virgin whose spilled blood would appease the hunger of the Sun God and insure the coming of the maize. In her mind, she saw the high priest approach, his face masked by hammered gold, rimmed by exotic feathers, his coppery chest greased, gleaming in the sun. What he held in his hand, however, was not the jagged sliver of obsidian, the sacrificial knife, but the huge, up curving length of his throbbing penis, a ruddy scimitar of meat crowned by a massive purple bulb.

She bit her lower lip to keep from screaming as he groped her ripe breasts with his hard, calloused fingers, as he climbed up on the altar, wedging his knees against the insides of her thighs. She watched spellbound as he bent his monstrous erection down between her legs, pushing the broad, smooth head up against her tight-lipped slit. The great rubbery knob nuzzled into her most secret place and, to her horror and shame, her vagina just fell apart under the insistent prodding, the thin pink labia coming away from each other, pushing open. And they were all sticky wet. Her own body had betrayed her.

Behind the golden mask, the high priest made a coughing sound that could've been a stifled laugh, then pulled back a bit, preparing to drive his powerful penis into her cunt. In that awful instant, she knew that he knew she wanted it, all of it, every gruesome, pussy-rending inch of his mammoth cock crammed up inside her. She lay there trembling, her chest heaving, her cheeks burning with the fever, awaiting his animal lunge.

The sound of the apartment's toilet flushing shattered her fantasy, brought her back to the present, to Southern California, to the campus of Mira Pavo College, to the rumpled bed.

"Want to use the bathroom, princess?" Paul said, sticking his head around the edge of the bathroom door. His dark brown eyes dropped from her face to her lewdly proffered fork and stayed there, riveted to the pink target under the downy fuzz.

Joselyn made a face at him and closed her thighs. The act was not prompted by any excess of modesty on her part. It was simply a show of her power over him. The resulting change in his expression was dramatic, going from delight to misery in an instant, but it did not please her. Her power over him was almost a tangible thing, an invisible leash she could feel in her hand, a leash connected to a choke collar about his thick, muscular neck. If Paul was an animal, he was a meek one. He was too easily controlled, too ready to jump through the hoop; he was a disappointment to her. Still, he was good-looking, tall and lean with a deep, deep suntan. The hair on his head was thick and black and curly, but there was no hair at all on his chest. His bare pectorals, like his other muscles, were hard and well-defined. He looked like he'd be a basket-ball player, but he wasn't. Paul was a Chemistry graduate student, too, and preferred to play his erotic games in bed.

He stepped out from behind the bathroom door and stood there for a moment as if unsure what her frown meant. Joselyn gazed at his naked loins, at the pale area left by the swim suit. Next to it, the crisp, shiny black hair of his pubis and the maroon colored flesh of his cock and balls. His cock was a long one, thick with a big spongy head and flaring rim that reminded her of a conquistador's helmet. His balls were large and hung low in their wrinkly, hair-fringed sack. Even as she watched, the thing dangling limply between his legs pulsed and started to grow, twitching, jerking against his thigh, slowly raising itself up from the dead.

She knew how to make it get stiff as a stick. Still frowning at him, she pulled her knees up, rolled to her side and turned her bottom towards him. She showed him everything she had. The whole of her crotch from the top of her fuzzy slit to the tiny, wrinkled pink ring of her rectum was visible between the silky sandwich of thighs and buttocks.