Note: This article assumes you have some experience with NT device driver development.

DPCs are a fundamental building block in NT's interrupt handling architecture. Interrupt servicing typically consists of two driver-provided components: an interrupt service routine (ISR) and a Deferred Procedure Call (DPC). ISR's execute at IRQL's above DISPATCH_LEVEL in the DIRQL range. Because one of NT's design goals is to spend as little time as possible at elevated IRQL, ISR's usually perform minimal interactions with their devices, normally just reading some state and getting the device to stop interrupting. The mechanism by which an ISR can finish processing at a lower IRQL is a DPC. Some time after an ISR requests a DPC, its DPC function will be called by NT at DISPATCH_LEVEL. While there are restrictions on what can be done at DISPATCH_LEVEL (e.g. touching pageable memory or blocking the thread), virtually nothing can be done from within an ISR. And of course, it is always possible to queue a worker thread work-item from a DPC so that interrupt processing can continue at PASSIVE_LEVEL.

While the NT DDK does a fairly good job of documenting DPCs and their use, there are some advanced DPC features that are not even mentioned. You might not find an immediate use for these features, but knowing that they are there can aid in your future driver designs. In this article I'm going to to describe how NT processes DPCs and document the exported NT functions that provide driver writers a finer degree of control over DPCs than the default APIs.

Deferred Procedure Calls are managed in NT by a DPC kernel objects (as opposed to Executive objects such as semaphores, events, file objects). There are two ways that DPCs can be used. If a device will only have one interrupt in progress at time, then the I/O Manager's DPC functions can be used. This course would be the one that would be a logical choice if you are using system IRP queuing.

Two functions are used when you rely on the I/O Manager's DPC management. The first, IoInitializeDpcRequest, initializes a dpc object and associates it with a particular device object. If you refer to the NT DDK kernel-mode function reference you'll see that it takes just two parameters: a device object and the address of a deferred procedure call function being registered. The DPC object that is initialized is the one that is contained in a device object.

Underneath the I/O Manager functions described above are the Kernel functions that actually implement basic DPC functionality. A driver for a device that accepts multiple simultaneous I/O requests must use the Kernel functions directly, bypassing the I/O Manager convenience routines. There is a strong parallel between the two interfaces, however. Instead of calling IoInitializeDpcRequest, a driver's entry invokes the function KeInitializeDpc to initialize a dpc object. KeInitializeDpc takes a driver-allocated DPC object, a pointer to the deferred function and a context parameter that will be passed to the function. As with most driver-allocated data structures that are handed to the Kernel, the DPC object must be allocated from non-paged memory such as non-paged pool, driver static global non-paged memory, or in a device object extension.

The I/O Manager's IoInitializeDpcRequest is actually nothing more than a wrapper around KeInitializeDpc.

A device object has both a field for an IRP, which would be used for serially-oriented I/O devices, and a field for a DPC, which is the DPC object used in I/O Manager-DPC functions. Similarly, IoRequestDpc is a macro that calls KeInsertQueueDpc.

It obtains the DPC object pointer for the call from the device object.

The Type field is also pretty obvious. Each object, whether it is an Executive or Kernel object, is tagged with a type so that functions can ensure that they are handed objects of the type that they expect. The Kernel object type values are simply determined from an enumerated list that contains entries for APCs, Events, Processes, Queues, Semaphores, Timers, as well as DPCs.

The final four fields, Number, Importance, DpcListEntry and Lock are more obscure and are undocumented. I'll describe each of these in the following sections.

The NT DDK describes KeInsertQueueDpc as taking a dpc object and placing it in the DPC queue, and then issuing a software interrupt at DISPATCH_LEVEL which will cause the system to "drain" the DPC queue and execute the DPC functions. This is not entirely true. Rather than have one system-wide queue for DPC objects, NT maintains a separate DPC queue for each processor in a multiprocessor system. The queue's head is in the Processor Region Control Block (PRCB). Which queue does a DPC object get put on? One might guess that when a DPC is queued that it ends up on the DPC queue of the processor on which KeInsertQueueDpc is called. this is true for non-targetted DPCs. When DPCs are initialized with KeInitializeDpc the number field is set to 0, which marks the DPC as non-targeted, that is, it will execute on the processor it is queued from. Figure 1 shows the typical flow of control for DPC queuing. 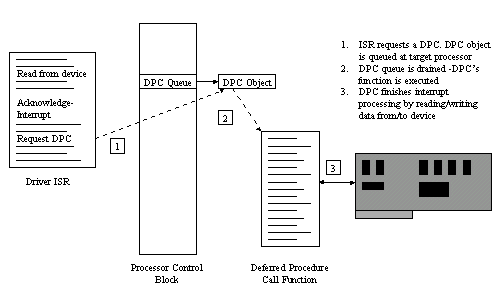 DPCs can be targeted so that they will only be queued on a certain processor with the call KeSetTargetProcessorDpc. this function, although undocumented, is prototyped in NTDDK.H, and takes a pointer to the DPC object being targeted and the number of the processor it will be queued upon. KeInsertQueueDpc looks at the Number field, and if it is less than 32, treats the DPC as non-targeted. KeInitializeDpc sets the number field to the number passed as a parameter plus 32. Thus, when KeInitializeDpc sets the number field to 0, it is initializing a DPC object as non-targeted. Another way of describing a non-targeted DPC is to say that its targeted at the current CPU (the one on which the ISR executed), which also describes DPCs that are actually targeted, but happen to be aimed at the processor that the ISR ran on.

The NT DDK states that a DISPATCH_LEVEL software interrupt is issued. This is also known as a DPC queue-drain interrupt, but it is also used for invocations of the scheduler. Under most circumstances it is generated as the DDK asserts. However, there are instances where it is not, and this affects the timeliness of DPC processing. What determines whether or not a software interrupt is generated is the combination of the DPC's target processor and the DPC's importance. The Importance field in the DPC object reflects the DPC's importance, which can be High, Medium, or Low. KeInitializeDpc sets this value to medium, so by default all DPCs are of medium importance. You can override this by calling KeSetImportanceDpc, another function that has its prototype in NTDDK.H, but that is undocumented. The values for High, Medium and Low are also in NTDDK.H (they are just an enumerated type). Before I describe how the importance affects when a DPC queue is drained, there is another effect priorities have on DPC queuing. DPCs that are of low or medium importance are placed at the end of the DPC queue they are targeted for, but high-importance DPCs are placed at the front of the queue!

In addition, when a processor is idle it drains any DPCs that are in its queue. Which leads me to an interesting trivia point: the system idle thread executes at DISPATCH_LEVEL rather than at PASSIVE_LEVEL like other threads. Why? Because the idle thread's responsibility (other than to keep the processor doing something when there is no real work to do) is to drain the DPC queue in cases where a DPC object was queued to the processor, but no drain interrupt was generated (like when a low priority DPC is queued and neither drain condition held true). Since DPCs execute at DISPATCH_LEVEL the idle thread is simply set to DISPATCH_LEVEL execution, which means that it, rather than KiDispatchInterrupt, ends up draining the DPC queue even when a drain interrupt is generated. This is because HalEndSystemInterrupt will return the irql to its pre-interrupt level, which will be DISPATCH_LEVEL if the idle thread was running. Thus, KiDispatchInterrupt will not be called (since the IRQL is not dropping below DISPATCH_LEVEL) and the queue will be drained by the idle thread.

Remember that the default behavior of DPCs if you use them without targetting or setting their importance, is that they are of Medium importance and will not be targeted.

So how does the information on DPC queue drainage, DPC priorities and DPC targeting affect you as a driver writer? Like I said in the introduction, you may never have a need to call upon the advanced capabilities of DPCs. Only one driver shipped with NT, NDIS, uses DPC targeting and priorities. NDIS uses low importance DPCs that are targeted at a particular processor for its DPC processing.