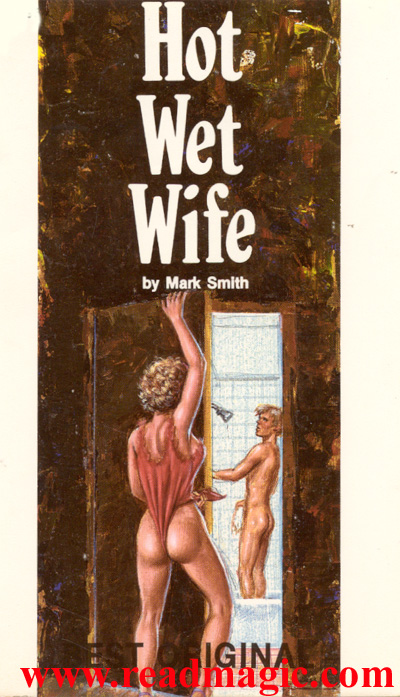 The warm rays of the summer sun beat down relentlessly on Alecia Allen's naked boy as she lay quietly on her stomach next to her swimming pool. Her body was deeply tanned all over; she seldom wore a swim suit under any circumstances and never wore one at all in her own back yard.

The yard was enclosed on three sides by a high wall, while the two-story, Spanish-style house she shared with her husband Larry formed the fourth boundary. Thus she could be certain that no one would see her while she sunbathed, though had she been in the middle of a crowded beach it would have made no difference to her. In fact, she might have liked the latter circumstances better than the present one, since she liked nothing better than to feel men's hungry eyes feasting on her nakedness, whatever the circumstances might be.

The temptation was strong to do just that, but she held back. She would have gladly plunged her fingers deep into her cunt right now had it not been for the fact that she was expecting a visitor any moment who would provide a much more enjoyable outlet for her pent-up excitement.

Jim was an airline pilot, an acquaintance loft over from the days, not so long ago, when Alecia had been a stewardess. They had met then, and on the relatively rare occasions when he had a layover within driving distance of Mocha's house they never failed to get together. Alecia thought about the eight inches of pure delight that would be deep inside her hungry pussy five minute after Jim arrived.

Where was he? Even though she knew Larry wasn't due home for another three hours, Alecia was anxious to have as much time with Jim as possible. They could never get enough of each other's bodies, and every minute he was delayed was another minute they couldn't spend together.

Just then she heard the sound of a car pulling up in the drive way outside. She smiled and pulled herself into a sitting position.

Suddenly Jim appeared as the door leading to the garage. For a moment he stood framed in the doorway, a smile on his rugged features he took in the sight, always welcome, of Alecia's naked body.

Jim smiled. "Thank you, dear lady of the lusty loins."