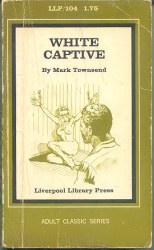 The low powerful sports car pulled smoothly into the long curved driveway and came to a silent stop before the large darkened two-story colonial-type house. The lights switched off, throwing the well kept grounds and garden into greater blackness. Inside, the boy reached over and pulled the young, silken-haired girl close to him and locked his lips tightly to hers. There was only the sound of a heavy impassioned breathing for a moment and then a small abrupt cry from the girl.

She struggled a moment with his hand, pulling it with hesitant force from beneath the top of her thin white-veneered formal. He resisted, and then let it be pushed limply away.

"Susan, for God's sake! We're engaged now. At least you could let me touch you."

"Oh, darling, I know, I know," she moaned against him. "I want you to touch me as much as you want to, but we just can't. Not before we're married."

"That's a good four years away and you know it," the boy objected. "I-I just don't think I can wait that long. It's driving me crazy already."

"Darling, we've just got to wait. It'll go by so fast we won't even know it, particularly with you away at college and me working. And we'll appreciate it so much more. You know we will."

She dropped her head to his shoulder and began to sob gently. Susan knew her arguments sounded childish to Richard, but in spite of even her own temptations that were growing more and more intense with each time he touched her, she could not bring herself to let him go too far. She remembered only too vividly the promises she had made to her father of being a good girl just before he died several months ago. He had been the most wonderful man in the world, and had been so deeply hurt by her brother's running away that she just couldn't go back on her promises to him now. She was sure that wherever he was, he would somehow know if she let him down. But, explaining this to Richard sounded so foolish she hadn't even bothered to try. She was certain he was beginning to think she didn't really care for him at all and this just was not true.

Richard sat still for a moment beside her, his arm hanging limply around her shoulders and then slowly began to stroke her hair with a comforting softness.

"All right, darling. I-I think I know how you feel and I'll try to hold myself back."