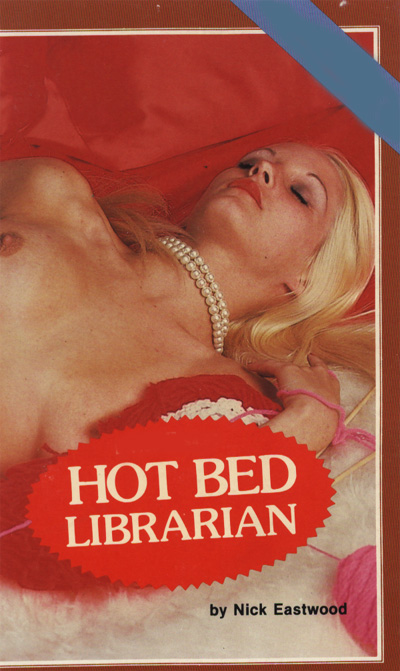 Jodie James, the new librarian at Valley High, had the attention of every male in the room. Boys pretending to study kept peering over the top of their books to sneak glances at the slim, pretty blonde as she worked at the main desk. In everybody's opinion, she was the sexiest librarian the school had ever had.

Unfortunately, her manner didn't match her looks. She had a slender, curvy body, with nice, long legs and high-riding tits. She had a beautiful face and long, light, golden hair. But she acted like a grim and prudish old maid.

Boys would smile at her as they checked out books, but their smiles were never returned. Miss James just looked grim and disapproving. The rumor around school was that she hated men and had no interest at all in sex. Otherwise, why would such a gorgeous woman still be single in her late twenties?

However, the students couldn't have guessed why Jodie James acted the way she did. And Jodie wasn't about to tell anybody the truth.

It made Jodie blush to think about it, and she thought about it a lot. Jodie had been fired from her last librarian job for making out in the stacks. She'd been involved in some very heavy necking with an attractive student when the principal happened by and caught them.

The fact of the matter was, Jodie had been unable to control herself. She'd always been that way around men. When an attractive guy came on to her, she responded with enthusiasm, no matter what time or place. She was an exceptionally hot-blooded young woman, and her sexual needs demanded to be satisfied.

Last time she'd been lucky. The principal could have ended her career as a librarian.

Instead, he'd hushed up the reason for her dismissal on the condition that she see a shrink and try to get some help for her problem. So she was free to seek a librarian jobs some other school.

She'd seen the shrink just as she'd promised, and they'd ended up fucking on his couch. Somehow, he never got around to helping her cure her case of hot pants. So when Jodie was hired at Valley High, she still didn't know how to control her incredible, sexual impulses. She was just doing her best to ignore them, acting like a prim old maid who wasn't interested in sex.