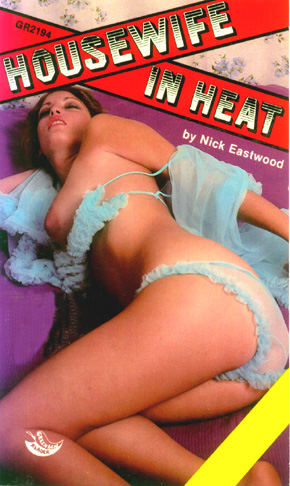 Mona Stevens lay naked, waiting for her husband Jerry to come to bed. She couldn't help grinning. She had quite a surprise waiting for Jerry tonight. She just hoped he'd appreciate it.

"Honey, are you coming pretty soon?" she called.

"A few more minutes," Jerry replied from the living room. "I wanta see the rest of this game."

Good old Jerry, Mona thought wistfully. He never changed. Even though he was leaving for a week tomorrow and this was their last chance to fuck, he still had to see all of his damned basketball game. Well, she'd just have to make up for lost time when he finally came to bed. Her pussy burned with need, and she stirred restlessly.

Her whole pussy seemed on fire with need. The hot flesh was swollen and taut, and she could feel thick cream leaking helplessly from the thirsty mouth of her cunt. Sighing, she ran her hands down over her sleek warm body, stimulating her throbbing tits, pressing the plump mound. From the living room she could hear the TV still blaring away.

Jerry was missing quite a sight. Mona was a lovely tall brunette of twenty-five, with fantastic big tits the size of small watermelons. Tonight those tits were especially enticing, swollen and thrusting, the large red nipples of stiff and pointed. Mona gently tweaked her pulsating nipples and felt little jolts of pleasure streaking right down to her slit.

"Ummmmm," she sighed. "Jerry, you bastards I need you!"