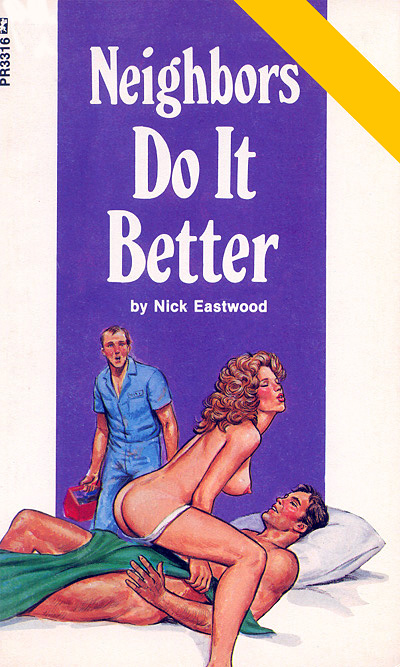 Neighbors do it better

Neighbors do it better

Tina Rogers lay naked in bed, listening to the rain hit the roof. It was almost nine, and her husband Ed still wasn't home from work. That didn't surprise her. On a night like this, Ed would probably be kept late. But Tina wished like hell that he was in another occupation.

As a plumber, Ed would be out right now dealing with flooded basements and clogged drain pipes. Tina wished he was home dealing with her. Her plumbing was really neglected.

She almost moaned aloud with need as she thought of her handsome husband.

She and Ed had been married almost five years, but the magic hadn't gone out of their marriages. They were as hot for each other as the day they met. The only problem was Ed's job. Now that he'd gone into business for himself, he never seemed to have any time off.

Sure, he was making good money so that someday soon they could buy their dream house and have a family, but in the meantime Tina was going out of her mind with sexual frustration. She needed a lot more loving than Ed was able to give her.

The beautiful brunette housewife kit the scaring heat in her slit and whimpered with frustration. What she needed more than anything in the world was her husband's big hard cock cramming her starved little cunt. But she wasn't likely to get it, not soon. Ed would come dragging home late, dog tired, too pooped to get it on.

She couldn't ask Ed to find another job. He'd trained long and hard to open his own plumbing business. She sure didn't want a divorce. Ed was the only man she'd ever loved. And she didn't believe in cheating. So that left her with only one thing to do about her sexual starvation.