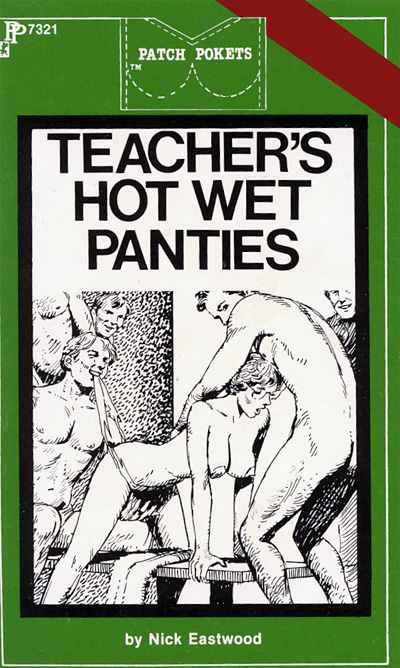 Miss Jean Walker's history class was meeting for the first time, the last class of the day at Oakdale High School. Miss Walker was new at the school, and in some ways she was a pleasant surprise to the students. Nobody had expected her to be so sexy looking.

Jean Walker was in her late twenties, a tall statuesque brunette with great legs, pretty face, and large thrusting tits. She looked like she belonged in a centerfold, not a classroom. Wylie and the other boys couldn't take their eyes off her, and the girls envied her terrific figure.

But the class soon discovered that Miss Walker's personality wasn't as pleasant as her appearance. As Wylie whispered a wisecrack to the guy sitting next to him, the beautiful schoolteacher snapped: "No talking in class! That will cost you half an hour after school, young man."

Wylie stared at her, open-mouthed. Oakdale was a pretty easy-going school, and the guys weren't used to strict teachers.

But as the hour moved on, they learned that Miss Walker meant business. She demanded perfect behavior from her students, and she didn't hesitate to hand out penalties. Wylie and the others quickly concluded that the class was going to be a colossal pain in the ass.

Jean Walker could see the hostility in the students' faces, and she realized she'd gotten off to a poor start with them. But she'd never taught in public school before, and she didn't know the ropes. Up to now, she'd taught only in all-girl schools. She didn't like being around males and never had.

Men, her widowed mother had warned her over and over again, wanted only one thing – and that thing was something that nice girls didn't even discuss.

Now Jean could barely conceal her distaste as she studied the boys in her class. For some reason her eyes kept moving to their crotches, to those mysterious cock-bulges. Of course, she'd read all about sex and knew what a cock was, but she'd never seen a real live cock. Not that she wanted to. Sex and men didn't interest her at all.

Still, she had to fight that maddening urge to stare at the boys' cock-bulges. She couldn't understand what was the matter with her. She'd just never been around males very much, so maybe it was natural curiosity. Long ago, when she was just a little girl, Jean had vowed never to marry, never to even let a man touch her.